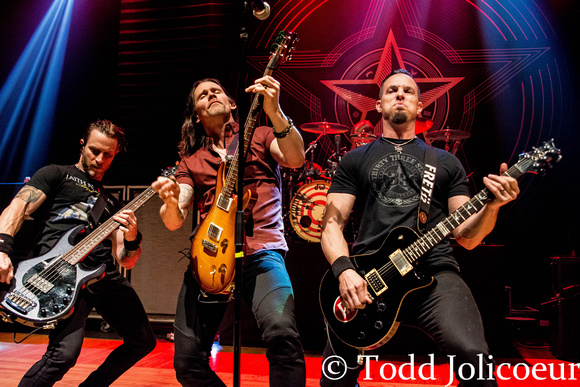 Celebrating and promoting their latest release, Alter Bridge made a swing through Detroit on their The Last Hero Tour at The Royal Oak Music Theatre and everyone at the packed venue was ready for a night full of killer rock and roll.  As the night progressed and the time for the band to hit the stage approached, you could feel the electricity all around you as we all waited patiently for the foursome to rescue us all... 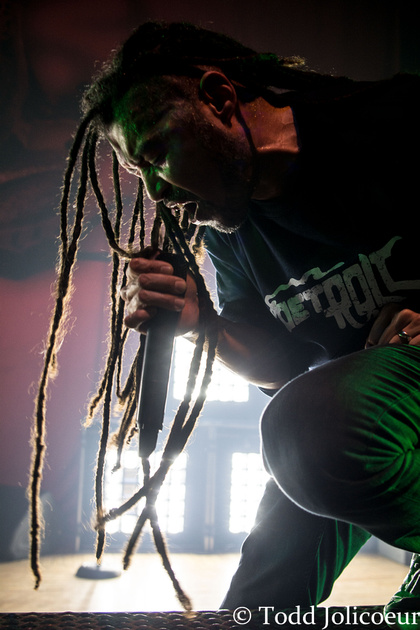 To start the ball rolling, Nonpoint came out to rev up the crowd and did so with vigor, attitude, and even a little humor.  Taking control of the stage and blasting the crowd with one killer rock track after another, the quintet showed everyone watching their portion of the show exactly how it is done.  With several shout outs to Detroit and other cities across the great state of Michigan, Elias kept the flow of the show moving without rushing the party.  As well as some tracks from the bands most recent release and their catalog, the group ripped through a killer cover of Phil Collins' "In The air Tonight" that has to be heard to be believed.  With that near the end of their set and "F**K'D" near the front we were bookended with great music front to back that got the crowd whipped into a frenzy waiting for the headliners. 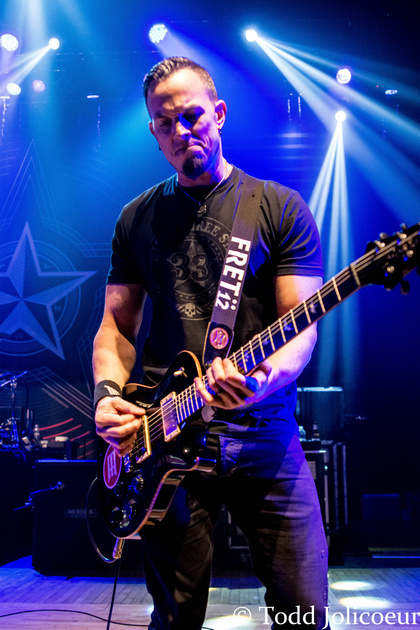 When the lights dimmed and the foursome of Myles, Mark, Brian, and Scott - better known as Alter Bridge - hit the stage this evening, the crowd went crazy in anticipation the nights musical festivities.  Kicking off the night with the powerhouse track "The Writing on the Wall" and following that up with "Come to Life", the crowd was fired up, but not as much as the band.  Beside the obvious concentration on the bands faces as they jumped from rocker to rocker, the smiles on their faces added to the evenings story.  These guys were on a mission to rock, but do so with friends and fans.  Myles Kennedy played guitar, adding solos occasionally to the mix as well, but his vocals drove the night and each song home with authority.  Songs like "Addicted To The Pain" and "White Knuckles" were filled with riffs, squeals, and monster solos from Mark Tremonti, who was playing in a hometown show (as he hails from nearby Grosse Pointe).  The setlist was cultivated to keep the show with their firsts in the air, heads banging, and having a great time.  Bassist Brian Marshall stalked the stage from front to back and left to right while anchoring the bottom end of the tunes.  His bass lines provided a killer sound to compliment each lick from the guitars on tracks like "Blackbird" and "Metalingus".  The tempo of the show was controlled perfectly by Scott Phillips from behind his drum kit.  The skinsman pounded his kit with fury on songs like "Ghost of Days Gone By" and "Ties That Bind" while the rest of the band did what they do bast on each of the songs.  Collectively, these guys pounded through other rockers like "Waters Rising" and "Open Your Eyes".  They didn't slow down and Kennedy's vocals seem to get stronger as the night progressed and they ripped through an encore of "Show Me a Leader" and my personal favorite "Rise Today" which sounded as fresh tonight as the first time I heard the song. Do yourself a huge favor and grab a ticket to see this show when it rolls through or near your town - you won't be disappointed and your inner rocker will thank you. 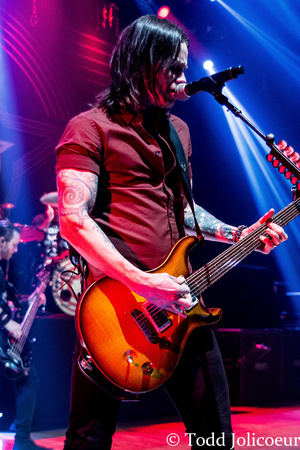 Setlist: The Writing on the Wall - Come to Life - Farther Than the Sun - Addicted to Pain - Ghost of Days Gone By - White Knuckles - Cry of Achilles - My Champion - Ties That Bind - Waters Rising - Watch Over You - Crows on a Wire - Isolation - Blackbird - Metalingus - Open Your Eyes - Show Me a Leader - Rise Today 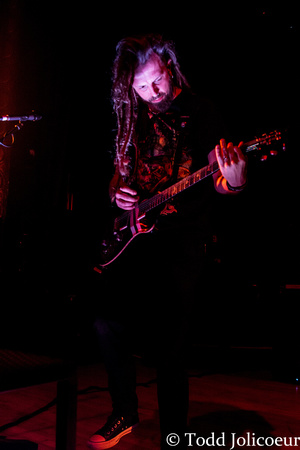 Setlist: Breaking Skin - Miracle - F**K'D - Hands Off - Generation Idiot - Divided... Conquer Them - What a Day - In the Air Tonight - My Last Dying - Breath - Bullet with a Name