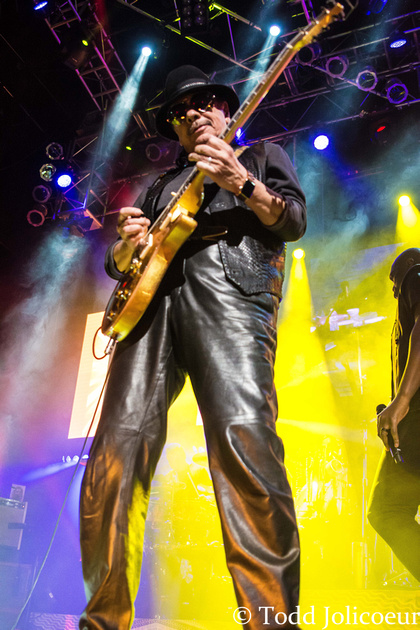 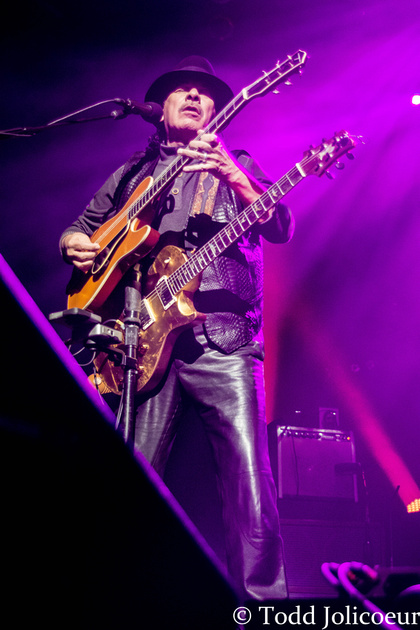 There are legends that come with tons of fanfare and others that simply keep playing, touring, recording, and even landing lucrative residencies at particulars - Carlos Santana falls into the latter category.  With a short trip planned to Las Vegas, I hit up the appropriate parties in order to photograph and check out the live show from this rocker during his residency at the House of Blues located in Mandalay Bay.  With the show focused on Santana and his legacy, I couldn't wait to see and hear all of the classics rockers come to life.  The show started with the Carlos Santana band taking their respective places on stage - with a drummer and two percussionists filling the back of the stage, a keyboard player to stage right, the bassist and rhythm guitarist mid to rear stage left, and two vocalist in front of them, the stage was set for Carlos to take his spot center stage or behind his mic on stage right.  With a setlist full of hits, fan favorites, and deep cuts, tonight was about the music.  The spotlight was cast on Santana at times, but he shared the stage and songs with his musical family, allowing them to step up for their due when appropriate.  There were flashes of brilliance from deep in the Santana catalog and even newer material that brought the guitarist radio hits more recently, like "Maria Maria" and "Smooth" (which popped up in the encore) with both tracks eliciting positive vibes from the fans that packed the venue to capacity.  With little banter between the performer and his audience, tonight was to celebrate the music of more than one generation of Santana fans... but also about positivity, love, and peace - which Carlos eluded to early on in the show.  Other songs stood out from a performance standpoint - the emotive guitar work in "Europa (Earth's Cry, Heaven's Smile)" was obvious from the back of the venue's main floor where I watched most of the show from.  Listening to Santana control the flow of the show and vibe of each track from behind his six-stringed instruments was fun, exciting, and inspiring.  Of course the venue exploded during a few of the songs during the night - especially when the band broke into the combo of "Evil Ways / A Love Supreme" and later during the one-two-three punch of "Black Magic Woman/Gypsy Queen" followed by the phenomenal Latin rhythm of "Oye Como Va."  While there were songs each of us might have loved to hear tonight, no one walked away unhappy, especially hearing Carlos and his band take us through his hits and a few covers, spanning the years.  A personal favorite in tonight's set was the Michael Jackson tune "Whatever Happens" which featured Santana in 2011.  Tonight's live version had all the magic and beauty of the original.  Set closer "Love, Peace and Happiness" took us out on a high note with a beautiful message in today's world.  If you happen to find yourself in Las Vegas with some time available, make your way to the House of Blues and see if you can witness the show that is An Intimate Evening with Santana - Greatest Hits Live. 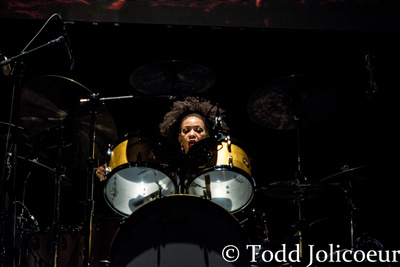