The Killthrax Tour was announced and I have to admit, I was excited to see Anthrax bring their brand of thrash metal back to Detroit once more, but the intriguing part of this show for me was to see Killswitch Engage for the first time live - I have heard their music and missed them as openers on shows previously... this was to be an event - not only for me, but for a capacity crowd that packed Detroit's Fillmore on a Saturday night in April.  With Hatebreed's Jamey Jasta and The Devil Wears Prada in tow, this was a metal heads wet dream, so to speak - with a little bit of everything for everyone.  As I wasn't able to hit the venue in time to check out either of the opening bands... as a matter of fact, KsE was going on a bit early as I entered the venue, I definitely was looking forward to the co-headliners doing it up tonight... 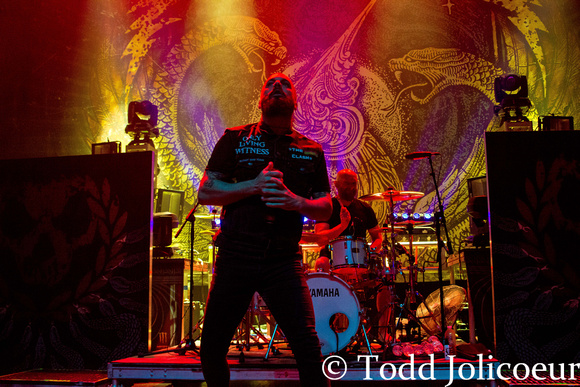 As I walked into the venue, I heard the audience roar and some guitars start screaming through the sound system.  I quickly made my way to the photo pit to take in the show from up close to start off.  With heavy tracks and an excited crowd in the mix, this portion of the show would not disappoint.  The energy that poured from the stage and washed across the audience was undeniable.  As the band ripped through various tracks from their catalog, you couldn't help but be drawn in by the music and the attitude that washed across the venue.  With songs that sounded familiar and others that were new to me, there was something edgy yet familiar about the band’s sound that made the songs palatable, regardless of your normal listening.  A high point came near the end of the bands set as they ripped through the metal classic "Holy Diver" which brought together fans of different eras and genres and got their heads banging and their fists pumping in unison as if there were no differences between any of us this evening.

Booked as a revolving co-headlining tour, Detroit pulled an evening when Anthrax would headline - a position I think they deserve on just about every tour I have seen them on (other than opening for the mighty Motörhead a couple years ago).  As the set change was completed and the intro music kicked in and blared through the speakers, the audience went insane.  As each member of the band made their way onto the stage, the excitement seemed to kick up a few notches from the stage to the back of the venue and from side to side.  Each band member took his familiar spot, with lead singer Joey Belladonna roaming freely and bassist Frank Bello jumping around and banging his head in just about every spot on the stage.  Guitarist Scott Ian circled and paced his area like a caged animal, venturing across the stage from time to time.  Jonathan Donais kept to himself while ripping through historical solos from the bands catalog.  Drummer Charlie Benante controlled the flow of the show from atop his perch behind the band.  Each song seemed to take on more urgency than the last as the band took the crowd through some of their favorites from their catalog and even some kick ass covers that allowed them to rework tracks that seemed as if these guys were the original craftsmen behind the classics.  Never a disappointing show, Anthrax are still out there doing what they do best - rocking the hell out of a venue packed with rockers. 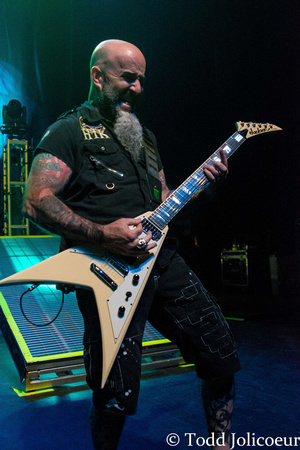 ANTHRAX SETLIST: Among the Living - Caught in a Mosh - Madhouse - Fight 'Em 'Til You Can't - I Am the Law - Breathing Lightning - Efilnikufesin (N.F.L.) - Evil Twin - March of the S.O.D. - Blood Eagle Wings - Antisocial - Indians 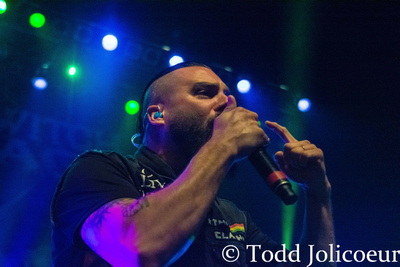 KILLSWITCH ENGAGE SETLIST: Hate by Design - Vide Infra - My Last Serenade - A Bid Farewell - No End in Sight - Numbered Days - Alone I Stand - The End of Heartache - Embrace the Journey...Upraised - Fixation on the Darkness - Rose of Sharyn - This Is Absolution - Beyond the Flames - My Curse - Strength of the Mind - Holy Diver - In Due Time