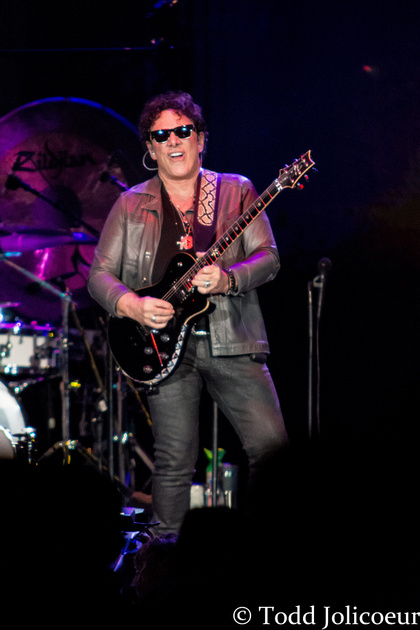 Hall Of Fame Rockers Journey brought separate worlds together underneath their stage lights when they rolled through Toledo the other night for a SOLD OUT show at The Huntington Center.  With Asia in tow, the bands were set to deliver a night full of hits to their fans, especially the swarm of Journey fans that packed the venue from top to bottom by time the quintet hit the stage, delivering fifteen powerful rockers and ballads that help each one of us tell at least a small portion of a story or two from our youths... whether rocking out with friends at a party or sneaking under a blanket for a kiss or more with that special someone... 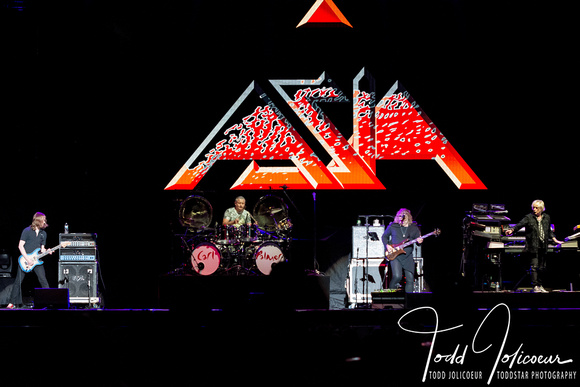 Asia was announced as the opener for this tour earlier this year and it was a bonus as I saw it.  This bands popularity back in the 80's was short lived, but well deserved as they put out a couple killer discs that had hits and deeper tracks that were just as good.  Original members Geoff Downes (keyboards) and Carl Palmer (drums) filled the show with a solo from each, as well as familiar backbeats, drum fills, and swirling keyboards that helped create the hits we have all come to know and love.  Guitarist Sam Colston (who doesn't look old enough to have been alive when the debut disc was released) delivered all of the guitar solos with the precision and sound that mirrored the originals during the bands seven song set.  Weeks after the band was announced for the tour, the third founding member, vocalist / bassist John Wetton passed away leaving the tour in hiatus.  With his blessing, the band has carried on with Billy Sherwood behind the mic and thumping the bass.  While he is no Wetton, he carried the torch better than most could have, leaving the crowd excited and fulfilled as the set wound down with the bands two biggest hits - "Only Time Will Tell" and "Heat of the Moment."

What can possibly be said about a Journey concert that hasn't been said before?  Not much.  No matter how many times I see these guys, they always bring their "A" game.  Kicking things off without a lot of fanfare as they have done in the past, they came out blazing with "Separate Ways (Worlds Apart)" and they set the bar and the pace early.  The band was doing everything they could to entertain the crowd - and the legions of Journey fans that packed the sold out Huntington Center screamed... cheered... sang... danced... you get the point.  Next up was the one-two punch of "Be Good To Yourself" and "Only The Young" which kept the tempo flowing and the energy up.  Watching Neal Schon move around on his side of the stage and float to near center stage during solos reminded us all of those killer licks and solos that we have all come to know and love.  Dialing up the rock quotient, the band ripped into my personal favorite "Stone In Love" and the gloves were off.  Arnel Pineda grabbed the vocals by the horns and rode the song out to the end, delivering a performance that added punch to the already killer track.  Jonathan Cain spent most of the evening behind his keyboards, but did venture out at times to add some rhythm guitar to the mix, as well as some harmonies and background vocals throughout the evening.  After a rousing version of "Anyway You Want It" followed by "Lights," the band slowed things down for the combo of "Open Arms" and "Who's Crying Now" bringing lovers together, singing, holding holds, and enjoying the moment.  With a killer rhythm section of bassist Ross Valory and drummer Steve Smith, the pace of the show was aptly anchored by these two.  Valory amused the audience throughout the show with his facial expressions and the way he roamed the stage.  Smith makes his job look so easy, seeming to never overexert himself.  When the band introduced and jumped into "Escape" the crowd fired back up and kept the band on their toes, even when the lesser known "La Do Da" came through the venues sound system.  digging back into their catalog, the band played "Wheel In The Sky" before taking the final breather of the evening with one of the best performances I have ever heard of "Faithfully."  The set closer (before the encore) was "Don't Stop Believin'."  I can tell you as a long time fan of the band and their music, these guys never stopped and neither did the fans... this song epitomizes the love Journey and their fans have for each other.  When the song ended, we all waited anxiously to see how the evening was going to close and we were not disappointed with the encore of "Dead Or Alive" and "Lovin', Touchin', Squeezin'."  These guys are out there doing what they have always done and proving to anyone who doubted them exactly why these guys are Rock and Roll Hall of Famers. 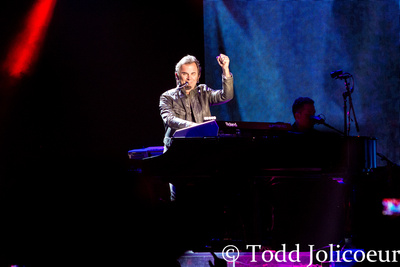 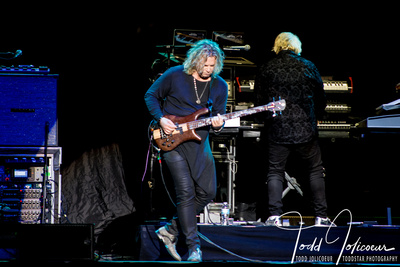