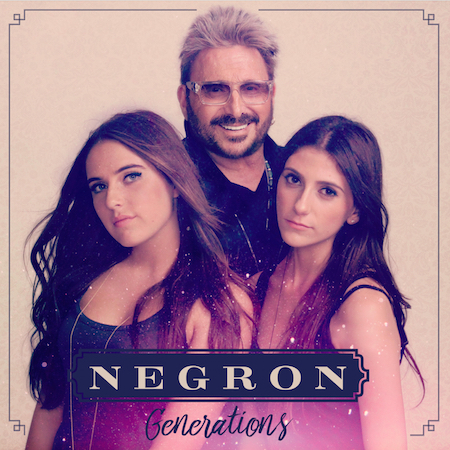 LOS ANGELES, Calif. (June 16, 2017) – Chuck Negron’s voice is engrained in American musical history through hits like “Joy to the World" and “One” from supergroup Three Dog Night. On June 30, Negron will release the album he’s always wanted to release with daughters Charlie and Annabelle also featuring three previously unreleased Three Dog Night tracks. The album, titled Negron Generations is available for preorder now at ChuckNegron.com and can be found on all digital music outlets June 30.

The unreleased tracks were recorded by the band in the mid-1970s prior to their first breakup in 1976. “The Letter,” “Save Our Ship” and “This Is Your Captain Calling” feature that iconic sound that could only come from the original vocalists of Three Dog Night; Cory Wells, Danny Hutton and Chuck Negron.

“I hope that the world can be reminded through this new record about the power of harmony and passion in music. The early years of Three Dog Night yielded much success but it was because the three of us matched each other near-perfectly and had a stellar band to back us up,” said Chuck Negron, continuing “to have my daughters involved in this project was a dream come true for me, I’ve always wanted to bring them into the music and they really ran with it.”

Chuck, Charlie and Annabelle created a unique harmony blend that only a family can. The sisters’ lead vocals on The Ronettes’ “Be My Baby/Do I Love You” are compelling.

Negron is currently touring for the fourth year on the critically-acclaimed, Happy Together tour, joining The Turtles featuring Flo and Eddie as well as The Association, The Box Tops, The Cowsills and The Archies starring Ron Dante.

About Chuck Negron: Chuck Negron, formerly of Three Dog Night, has been captivating audiences for over five decades with his iconic vocals, unique humor and brilliant storytelling. His catalog of hits are timeless and appeal to music fans of all ages. In 1967, Negron became a founding member of Three Dog Night; a vocal trio having roots in R&B, rock-n-roll, and urban doo wop, creating a style of music that was totally new and unique. The world was introduced to Negron and Three Dog Night in 1969 by the band’s first million-seller “One.” Driven by Negron’s solo lead vocals on four million-selling singles, three #1 records, (one which topped the charts for six weeks, “Joy to The World”) five top 5 hits and seven top 40 hits, he put and kept Three Dog Night on the charts for six years. He performs upwards of 70 shows a year giving audiences the opportunity to hear his impressive volume of hits plus an exciting repertoire of new songs. He will also be announcing the release of multiple special projects in 2017, all while celebrating 25 years of sobriety after an infamous and very public life or death battle with addiction during his Three Dog Night years.  For more information please visit www.chucknegron.com.

About Charlie Negron: Charlie Negron is 23 years old and was born and raised in Los Angeles, California. She received her Bachelor of Fine Arts in Musical Arts from the California Institute of the Arts. Her love of music shines through her social lifestyle including a fashion, beauty and lifestyle blog “Kiss on the Chic”. Everything Charlie does is in pursuit of happiness and she is known to all that know her as a fun, silly light in the world. For more information please visit CharlieNegron.com, Facebook or Twitter.

About Annabelle Negron: Annabelle Negron has been around music her entire life. She hails from a family deeply rooted in the arts with her father, former Three Dog Night vocalist Chuck Negron, actress mother Kate Vernon, known for roles in “X: The Malcolm X Story,” “Falcon Crest,” “Pretty In Pink” and “Battlestar Gallactica” among others and grandfather John Vernon best known as Dean Wormer in “Animal House.” At only 16 years old, Annabelle has many passions, but growing up onstage and in the studio with her dad has given her a strong appreciation for music which she showcases in Negron Generations.