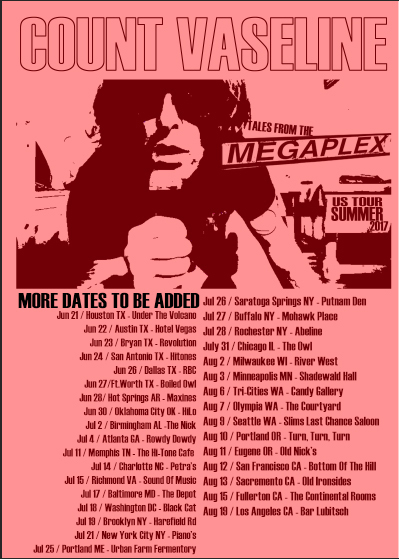 Count Vaseline is an alternative rock project founded in 2016 by songwriter, musician and producer ’Stefan Murphy’ during a creative spell in Berlin Germany. Count Vaseline is very much inspired by past masters such as the Velvet Underground, Modern Lovers, Suicide, Television Personalities and The Fall. 80s and 90s british bands like Echo And The Bunnymen The Jesus And Mary Chain and Spacemen 3. The sound is often a marriage of 60s pop and minimal psychedelic rock, inspired by bands like Black Lips and Fat White Family. Murphy recently moved from Europe to Atlanta, where he is currently building a recording studio - from there he has announced a big tour of the US in June, July and August. Dates are below.

After conceiving the project and following only a handful of live appearances in Germany, Count Vaseline decamped to the US to begin working on what would quickly become his first album ‘Yo No Soy Marinero’. The narrative of the record is very personal and details a difficult phase in Murphy’s life and creativity as well as a celebration of his trials and tribulations in Berlin. Making the decision to stay in the US was closely followed by a Presidential election that was going to send the universe into something of a tailspin. The rise of Donald Trump as well as a lot of depressing reading about the cyclical patterns in world politics quickly gave birth to The Count’s second album, the very minimal ‘Cascade’.

But it wasn’t all doom and gloom. ‘Russia’, the forthcoming single, is designed to make the people dance. The song was inspired by the documentary film ‘Hypernormalization’ and is a personal account of two lovers trying to break free from the constraints of the modern world. The song is deliberately performed at 117 beats per minute, the same BPM as Quincy jones / Michael Jacksons magnum opus ‘Billie Jean’, one of the most danceable tunes in history.