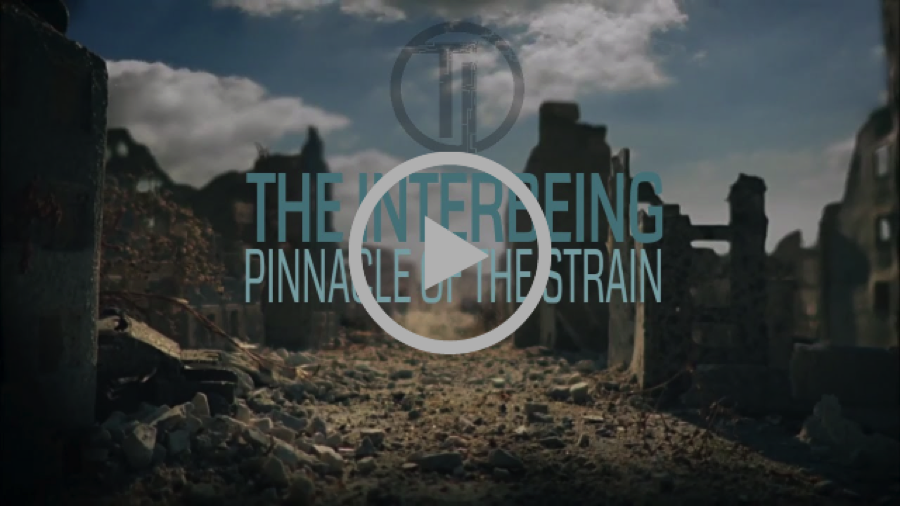 Today The Interbeing releases the third and last single from their upcoming Album "Among The Amorphous". The video is a dark animated look into the birth of body parts and a dystopian journey through life itself. The animations are made by Floris Kaayk and taken from his short film "The Origin Of Creatures." Watch the video HERE.

The new album "Among The Amorphous" will be released worldwide through Long Branch Records as CD, LP, Download and Stream on June 23rd.  Order the album HERE.

Singer Dara Corcoran about "Pinnacle Of The Strain": "'Pinnacle of the Strain' is one of the last songs on our concept album "Among The Amorphous". After being purged by his creators The Interbeing appears in the wake of his punishment and slowly assembles his self. He discovers that his deformed shape has left him stronger than before.  We wanted the visuals in this song to be more extreme and when I saw "The Origin of Creatures" by Floris Kaayk I was extremely inspired. The video shows a dystopian world where human limbs are fused to special beings and together they form a colony. The symbolism shows The Interbeing becoming reassembled."

The Interbeing smashed the Danish Metal scene with their debut album "Edge of The Obscure" in 2011. Acclaimed "Album of the Year" by the largest music magazine in Denmark, GAFFA, the album got top marks and massive exposure in some of the biggest metal magazines worldwide.

In the wake of the release The Interbeing played shows all over Europe ranging from Euroblast in Cologne, UK Tech Fest and Copenhell in Copenhagen, and had the honor to be the main support for massive international names such as Stone Sour (US), Meshuggah (SE) and Parkway Drive (AU).

The interest for The Interbeing expanded to the other side of the world and in 2012 the album was re-released in Japan with strong sales and profit. Two tracks from the album were later used as a soundtrack in a Japanese game. Recently in November 2016 the band played a resounding sold out show at the industry festival Hokuo Music Week in Tokyo. The challenging second album has been underway for some time. Numerously all the songs have been under review due to the band's ultimate determination to perfect each track and the album as a whole. The result appears in the form of the visionary dystopian concept album "Among the Amorphous". An album that lifts the bar in regards of storytelling and songwriting in the world of Technical Metal. The songs have a sinister David Lynch feel to it while the massive sections of polyrhythmic Meshuggah-inspired sonances envelop the listener. In conclusion the soundscape peaks with great evoking choruses that would even get Devin Townsend's stamp of approval. The Interbeing plunges into a futuristic music journey in which Dara Corcoran's constant shifting between growls, whispering, chanting and grand melodies makes this album one of the most ambitious albums in Danish Metal in many years.

"Among the Amorphous" is mixed by the newly talented producer Jonas Haagensen and mastered by Jacob Hansen at Hansen Studios (Volbeat, Dizzy Mizz Lizzy, Pretty Maids).

PREORDER "AMONG THE AMORPHOUS" HERE