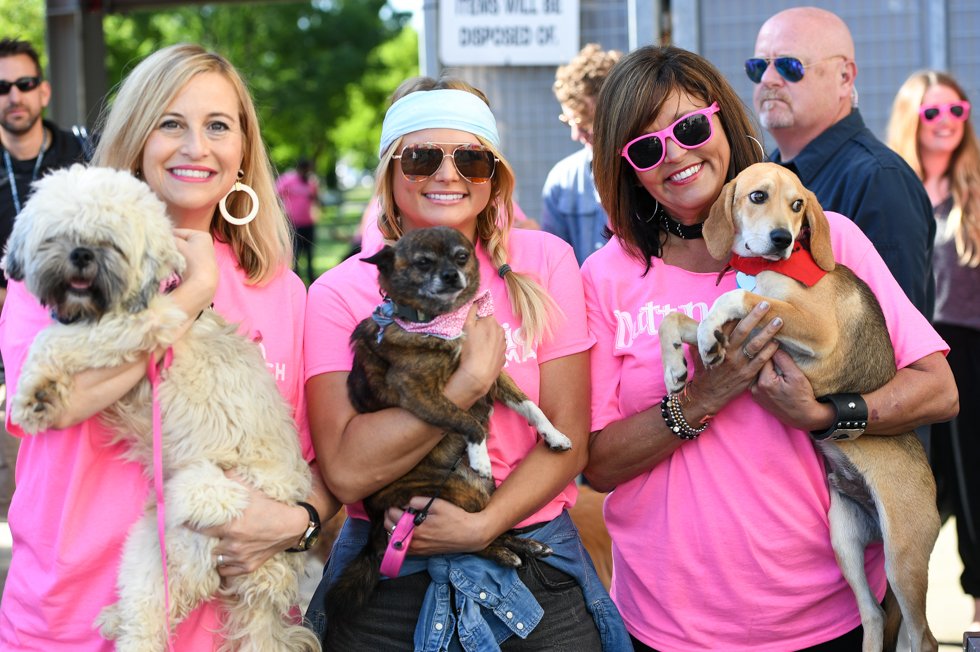 Miranda with more than 1000 fellow animal lovers, including Nashville Mayor Megan Barry, created a sea of pink as they, along with approximately 120 dogs marched from Nissan Stadium over the Nashville Pedestrian Bridge, and ended at Chevrolet Walk of Fame Park, where Lambert was joined onstage by Storme Warren, host of SiriusXM’s “The Highway.”

The MuttNation Foundation Adoption Drive at CMA Fan Fair X featured 60 dogs, of which 30 of them walked in the march.  Besides the rescue pups, the offerings included the popular “Puppy Corral” where prospective owners could play with the dogs,  a photo booth and of course the MuttNation mobile unit. The adoption drive matched the perfect shelter pups to new families in 21 states as well as Canada.  Adopt, don’t shop was in full force this week where all of the 60 apoptable dogs found their forever homes!

“I am so grateful that all these amazing dogs found their forever homes” said Lambert.  “Marching with so many amazing fans and fellow animal lovers was really a highlight of CMA Fest for me.”

For fans who couldn’t be in Nashville for the activities, don’t fret, there is still a way to participate.  Through June 19, folks can visit MuttNationFoundation.com and enter in the MuttNation Shelter Day Sweepstakes for a chance to win working with Miranda Lambert making over an animal shelter in need.  Fans are rewarded at higher donation levels with a handful of unique incentives including exclusive merchandise, meet & greets and more.

About MuttNation Foundation (501(c)(3 non-profit organization): Miranda’s love for animals has always been an important part of who she is. Miranda and her mom, Bev Lambert, founded MuttNation Foundation in 2009 to shine a spotlight on rescue animals, assist shelters, and to ensure that as many dogs as possible would have a safe and loving place to call home. All donations are 100% tax deductible. The Lamberts, along with a passionate board of directors ensure that your hard-earned dollars go towards improving the lives of animals.

About Miranda Lambert: Vanner Records/RCA Records Nashville singer/songwriter Miranda Lambert is the reigning ACM Female Vocalist of the Year, having been bestowed this honor for eight consecutive years. Her accolades include 2 Grammy Awards, 12 (CMA) Country Music Associations Awards, and 28 (ACM) Academy of Country Music Awards as well as many other honors, including the prestigious Harmony Award from the Nashville Symphony.

The Texas native released her most recent effort, a double album titled The Weight of These Wings in November 2016, which debuted at No. 1 on the Billboard Country Albums chart. She touts six studio albums to her repertoire; Kerosene (2005), Crazy Ex-Girlfriend (2007), Revolution (2009), Four The Record (2011) and Platinum (2014), the latter earning Lambert a GRAMMY Award for Best Country Album, in addition to her previous GRAMMY win for Best Female Country Vocal Performance in 2010 for “The House That Built Me.”  The first song released from The Weight Of These Wings, “Vice,” received multiple Grammy and ACM Award nominations. Her third single, “Tin Man”, is currently at Country Radio. www.Mirandalambert.com

About CMA Music Festival: The Ultimate Country Music Fan Experience™ began in 1972 as Fan Fair®, bringing 5,000 fans to Nashville’s Municipal Auditorium. Now 46 years later, the legendary Festival has become the city’s signature music event hosting more than 88,500 fans from every state and two dozen foreign countries. The 2016 CMA Music Festival featured 11 stages with more than 300 acts and 100 hours of music. And it all benefits music education. Since 2006, CMA and the CMA Foundation have donated more than $17.5 million to sustainable music education initiatives across the U.S. thanks to the fans who attend CMA Music Festival and the artists who perform for free. CMA Music Festival is filmed for a national television special to air on the ABC Television Network. This is the 14th consecutive year, a feat no other music festival has achieved. "CMA Fest 2017" is executive-produced by Robert Deaton. The special will be hosted for the first time by Kelsea Ballerini and Thomas Rhett.