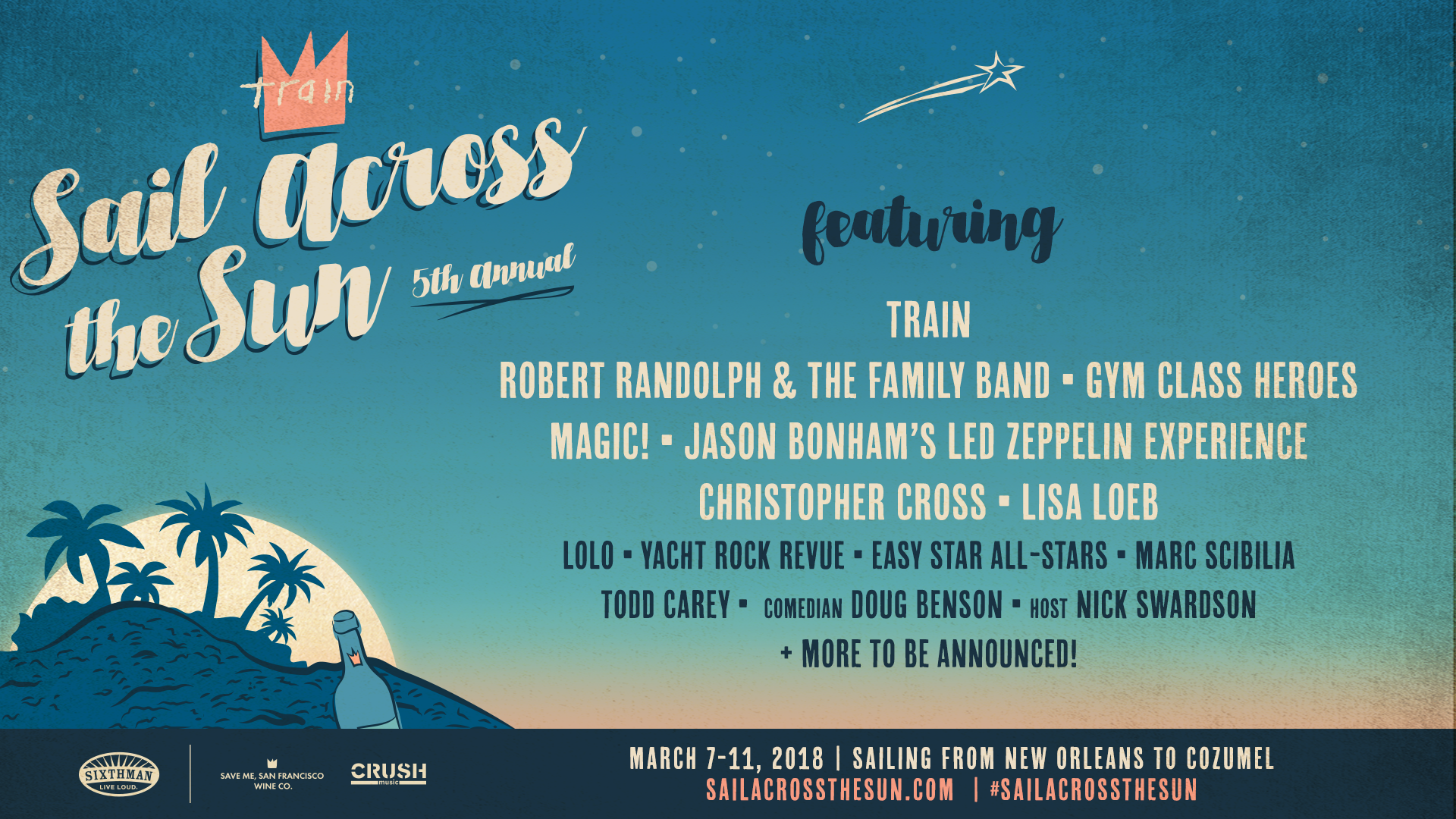 Join the presale  for this cruise vacation now at SailAcrossTheSun.com! Book during the pre-sale and get exclusive access to a photo with Train while on board.

Sail Across the Sun vacationers will be treated to autograph sessions with supporting artists and dozens of musical performances across five stages, including three headlining shows from their roots-rocking hosts, Train. Additional entertainers will be added to the diverse lineup in the coming months.

Relive 2017’s 4th Annual Sail Across the Sun at: sailacrossthesun.com/experience/.

With 15 decks of dining and entertainment, Norwegian Pearl is a destination of her own, offering guests access to 13 bars and lounges, 19 dining experiences, one outdoor pool, hot tubs, and an award-winning spa. Guests can also shoot some hoops on the sports court, bowl a few frames at the onboard bowling alley or try and tempt lady luck at the Pearl Club Casino. Plus, audiophiles and vinophiles alike will enjoy a day-long excursion to the Caribbean paradise of Cozumel, Mexico, where fantastic fishing, snorkeling and boating opportunities await adventurous travelers.

Double occupancy staterooms aboard the 5thannual Sail Across The Sun begin at $975 per person, plus taxes and fees. For more information about booking your vacation, visit us online at sailacrossthesun.com/ or call Sixthman directly at 877-379-9177 between the hours of 10am ET and 6pm ET.

ABOUT TRAIN: Train is a multi-GRAMMY and Billboard award-winning band from San Francisco, CA that has had 14 songs on Billboard’s Hot 100 list since the release of their debut self-titled album. Train's climb to the top began in San Francisco in 1994, as the original 5-member band tenaciously built a loyal following, leading up to their own self-titled debut album, released by Columbia in 1998. The tumbling wordplay of "Meet Virginia" gave them their first unlikely radio hit and 2001’s Drops Of Jupiter broke them to multi-platinum status thanks to the double-GRAMMY award-winning title song that spent 10 months in the Top 40, and snaring the Best Rock Song GRAMMY award by beating out Coldplay and two U2 songs. The group won another GRAMMY award in 2011 for their global hit “Hey Soul Sister,” the #1 best-selling smash and most downloaded single of 2010, from their multi-platinum album Save Me, San Francisco. Next was 2012's California 37, which launched the hit "Drive By" reaching the Top 10 in 13 countries. They've sold more than 10 million albums worldwide, more than 30 million tracks, with multiple platinum/gold citations, including 3 GRAMMY awards, 2 Billboard Music Awards and dozens of other honors. In 2014 Bulletproof Picasso—the band’s 7th studio album—debuted at No. 5 on the Billboard Top 200 and earned rave reviews.

The band recently released their 8th album, a girl a bottle a boat, via Columbia Records on Jan. 27. Lead single, “Play That Song” had a strong start, hitting Top 5 on the iTunes chart, Top 10 at Hot AC radio, and climbing Adult Top 40.

Train has also released on a holiday album, Christmas in Tahoe, which brings their signature sound to holiday classics as well as three original songs and Does Led Zeppelin which features the band covering one of their favorite bands. Additionally, Train's award-winning Save Me, San Francisco Wine Co. released their 6th varietal, 'Bulletproof Picasso' sauvignon blanc. Proceeds from the wine support Family House, a San Francisco charity that supports families of children with cancer and other life-threatening illnesses.