NEWS: Wayward Sons To Release "Ghosts Of Yet To Come" September 15th via Frontiers Music 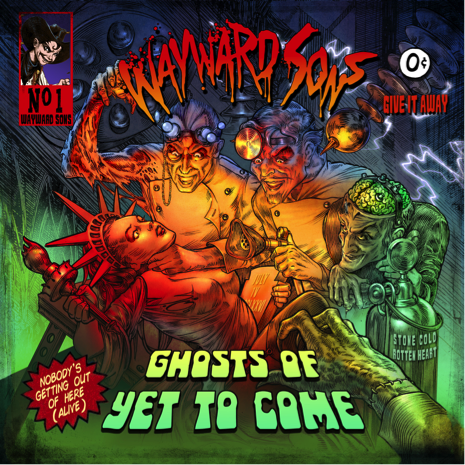 Wayward Sons are delighted to announce the release of their debut album "Ghosts Of Yet To Come" on September 15th via Frontiers Music Srl.

Wayward Sons is a UK guitar act made up of Toby Jepson (Vocals/Guitar), Sam Wood (Guitar), Nic Wastell (Bass), Dave Kemp (Keys) and Phil Martini (Drums). They have an impressive resume of groups they have previously worked with - Little Angels, Gun, Spear Of Destiny, Treason Kings and Chrome Molly to name a few - which is reassuring in terms of the band as players, but doesn't really hint at their sound. Wayward Sons sound nothing like the sum of their parts. The music is hard rock but mixed with a vitality and energy - both musically and lyrically.

The band is set to release four videos to support single releases. The videos together will make one short film. You can see the first video for the debut single "Until The End" HERE.

Order the album here http://radi.al/WaywardSonsor at the links below:

Listen to the current single on Spotify: http://radi.al/WaywardSonsSpotify

Digital pre-orders come with an instant download of  "Until The End".

"Ghosts Of Yet To Come" is a hugely accomplished debut album - as might be expected. From the staccato riffing of "Give It Away" to the melodic intro of first single "Until The End", from the hard rock of "Ghosts" to 4/4 rock of "Don't Wanna Go", the album sounds familiar yet of its own. Toby Jepson had the basis of songs written when the band formed. Together they then took these rough song ideas and forged their own sound. Lyrically the album sees Jepson treading a far more personal line than some of his previous output.

"I feel I have unfinished business, stories still left to tell, points to make, noise to create, all of the above... besides, it wasn't a choice, more of a need. My intention is very simple. I want to write about what makes me tick; about what I believe in. Hopefully you will believe in it too. It will be warts and all," says Jepson.

The album was produced by Wayward Sons (Toby Jepson's previous credits as a songwriter and producer include the likes of Katie Melua, The Virgin Marys, The Answer and Toseland) and Chris D'Adda (Nick Cave And The Bad Seeds).

"Ghosts Of Yet To Come" will at turns surprise, beguile and inspire...

Wayward Sons have a series of dates through 2017, with more to follow. Confirmed so far are:

Headline tickets are available at www.thelouisiana.net

Festival information is available at:

"Ghosts Of Yet To Come" is released through Frontiers Music Srl on the 15th of September 2017.