Gotta love when a rocker you love swings through town (well, close to town) and plays a venue that is perfect for their show.  When Rob Zombie announced he was playing Sylvania, OH's Centennials Terrace for one of his five 2017 Satanic Orgy Tour shows, I knew I had to witness the spectacle that is a Rob Zombie show.  Leaving my lake vacation early, I tackled the 2-1/2 drive to see this show.  With Detroit, MI openers Kaliedo warming up the crowd, Zombie and his band were prepared to deliver a show only they can to a crowd that ate up every note as well as the visual orgasm that Rob, his band, and crew have come to be known for... 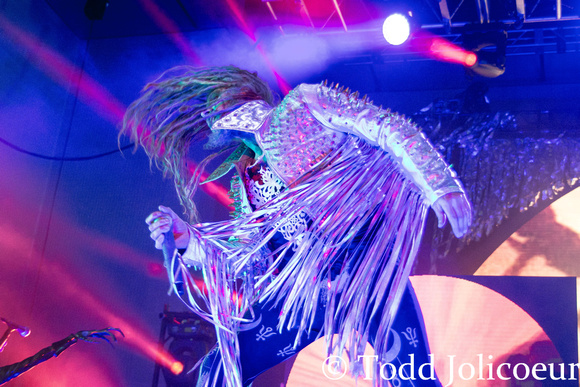 As the sun slowly disappeared behind the horizon, Zombie and his band - guitarist John 5, bassist Matt Montgomery, and drummer Ginger Fish - took their respective places on stage and prepared for the aural onslaught of rock that was about to take place.  As soon as the first note rang through the venue's sound system, the audience exploded and they didn't let up until after the last note faded and the lights came up.  While the lighting for the first three songs are not ideal for a photographer (gotta love heavy reds, blues, and greens), they do add to the ambiance of the songs and show from a visual standpoint.  Listening to Rob kick around songs from his catalog, both solo and with White Zombie, as well as a couple covers, does the ears good.  The music may not be for everybody, but it was for everybody at tonight's show.  Songs from his latest release - 2016's The Electric Warlock Acid Witch Satanic Orgy Celebration Dispenser - blended perfectly with others from his bag of musical tricks dating back to 1998's Hellbilly Deluxe.  Even cover;s of Alice Cooper's "School's Out" and The Ramones' "Blitzkrieg Bop" sounded as if they belonged to Zombie.  While guitarist John 5 stalked stage left primarily and bassist Montgomery hung stage right for the majority of the show, they did often trade up in order to let the fans get a glimpse of the men behind the music.  Unfortunately for him, drummer Ginger Fish was unable to roam as freely as others - especially Rob who roams and paces the front of the stage like a caged animal waiting to make his escape.  Engaging the audience from time to time, Zombie has cultivated a repertoire of stage antics and song call outs to rival KISS' Paul Stanley, but the Coupe de gras this evening was the intro to "Well, Everybody's Fucking in a U.F.O." where he and John launched a couple inflatable aliens into the audience for a crowd surfing competition.  When an overzealous fan grabbed one and refused to give it up, Rob stopped the show until E.T. was set free.  Listening to him speak to his fans and audience, it feels as if he is chatting with friends... he doesn't watch what he says or get too P.C.  As always, I left the venue with a smile on my face and enough killer songs in my head to fuel the hour plus drive home.  There are only a couple shows left on this swing, but fear not... Rob Zombie is silently preparing fro his next musical attack and tour!!! 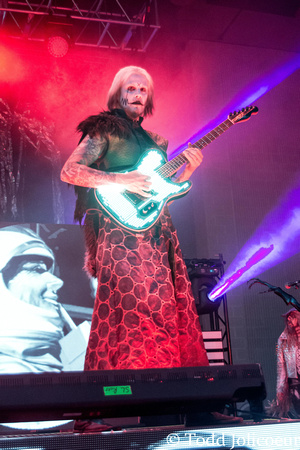