According to a recent press release: "The Michigan Burlesque Festival started in 2012 with the intent to bring some of the world’s most unique performers to Detroit in hopes of reuniting the traditional concepts of original burlesque theater, where dancers and vaudevillians shared a stage to provide well rounded and entertaining sexy comedic show. It has grown into a two-day festival featuring not-to-miss local talent and award-winning performance artists and world renown burlesque performers, such as past headliners: Lushes LaMoan, Bella Sin, The Weird Sisters, Red Hot Annie, Super Happy Funtime Burlesque, Russell Brunner, Roxi D’Lite, Dangrrr Doll, Ray Gunn, Mr. Gorgeous, Jeez Loueez, Satori Circus, Hank E Panky, Dirty Martini along with so many more phenomenal performers." We get the performer Phaedra Black to discuss routines, influences, and much more...

1. Tell us a little about your latest developed routine.  What drove you to choose the particular piece of music, create the costume, and pull together the specific moves in the routine?  Are there any links between that routine and your “real life” that tie the two side of you together?

This piece was created as a sort of “Fuck You” piece. I had submitted to a show and was told by the producer “I haven’t seen you perform in 3 years, but I don’t think this is your style.” We all get rejected and can move on from our lives, but this one just felt mean spirited and ignorant. So, I decided to put all my anger into an act. I had a beautiful corset I bought a couple years ago that I hadn’t paired with an act yet, so I used that corset as inspiration for the color scheme. I listened to various Spotify playlists to find music, and came across this song that set the mood that I wanted. It was really interesting to listen to with various dings and cranks to it, a lot of sound bites that inspired movement. As I continued developing this act, I utilized moves that represented me grabbing my power back, as well as freeing myself of worrying about other’s opinions.

2. What got you into burlesque, and can you tell us about the moment you realized you wanted to be a performer? Building on that, is there a specific performer or act that guided your performances in the beginning?

I’d always loved performing. I grew up loving to sing and play pretend as other creatures. I learned to play the flute and I joined the chorus at school. But performance opportunities were few and far between in my small town. I went to college to study theatre, but realized pretty quickly I was the big fish in the small pond that was just dropped off in a middle of an ocean. While I received my degree in theatre, I was too scared to pursue acting. Fast forward about 8 year later, I was really itching to get back on stage again, but just didn’t know where to start. At the same time, I met this guy online who one day invited me to a burlesque show. After his reassurance I wouldn’t be the only girl there, I agreed to meet up with him. It ended up being the best first date I went on. As our relationship progressed, we saw more and more shows, and I got to know his friend, Rhonda Vous, that was in the troupe. It clicked in my head that “I can do this,” when I saw Frenchie Kiss doing a Parisian tassel twirling act. It was reassuring to see someone who’s body type wasn’t typical slender showgirl getting the crowd wild. That guy bought me my first set of burlesque classes, and I just took off from there. I’m now married to him!

3. Who would be your main influences or performers you admire?

Seeing Rhonda Vous and Frenchie Kiss perform in the Chicago Starlets shows inspired me to get up on that stage. I started taking classes with Michelle L’Amour at Studio L’Amour, and I’m so happy that I learned the basics and honed my skills with her. Even as someone who doesn’t perform classic pieces, I felt it was imperative to have a firm understanding of the foundational moves. Ms. Pixy had an indirect influence on my career by building the foundations of Gorilla Tango Burlesque, a group that produced scripted nerdlesque shows, and where I was able to work and connect with other nerdlesque performers. I look up to Cruel Valentine for their fierceness, and Angela Eve for her gorgeous costuming, energy on stage, and her savviness as a business woman.

4. If you could call in any one collaborator to do a routine with, who would it be, and why?

April O’Peel. I’ve never met her in person, but every time I see her perform, she’s a riot and so creative!

5. How would you describe your performance style to someone who’d never seen you perform before? What is one review from the media, an audience member, or a fan has made that made you cringe?

Expressive, joyous, and inviting! One time, an audience member came up to me and said, “You are SO BRAVE.” I could tell that for this person, it wasn’t meant to be a back-handed compliment, so I treated the comment with kindness. After all, it was based on a projection of her own insecurities and admiration for someone that could seemingly overcome them. But to be brave, you have to be scared, but performing is so much a part of who I am, being scared never crossed my mind.

6. When it comes to the musical component of your performance, is there a certain musical genre, artist, or specific song you have always wanted to use?  What was the first song you ever used – and what does that song mean to you now?

The first song I performed to was "The Man That Got Away," originally performed by Judy Garland, though the version I had was performed by Lita Roza. I ended up retiring this act because ultimately, the slowness of the song didn’t match with my performance personality. Now, I don’t have a specific genre I aim for, but I seem to gravitate to higher beat songs with some theatricality to them. I could see myself performing to a Queen song someday. 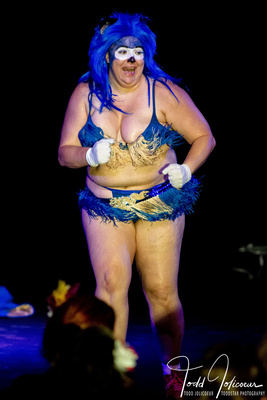 7. What is one thing you wish audience members knew about you, your performances, or burlesque in general?  What do you feel is the biggest misconception about you and your burlesque career?

Being a burlesque performer takes serious time management and organizing skills. Since this art form doesn’t pay our day-to-day expenses, most of us have day jobs outside of performing. So we have to squeeze in our practice time, class and skill building time, research outside of the 40 hours a week we dedicate to earning a paycheck as well as our friendships outside of the burlesque world.

8. When was the last time you were star struck by a burlesque performer and who was it?

Last year, when I was attending BHOF, I was sitting next to the 2018 Queen of Burlesque winner, INGA, during the showcases. I worked up the courage to say hi and congratulations. But yeah, whoa!

9. What is the best part of being a burlesque performer?  Conversely, what is the worst part? If you could no longer be a performer for whatever reason, what would be your other artistic outlet?

It sounds weird, but when I’m just walking around in my everyday life, I feel like it’s my cover for my super hero identity. That is, if flinging your clothes off in front of an audience makes you a super hero. I also enjoy the aspect of thinking of ridiculous scenarios, then getting to put them on stage for others to laugh along with you. The worst part is trying to have your voice heard above all the noise, so people will want to see the ridiculous art you create. If I wasn’t able to perform any longer, I would probably do a lot of singing in the shower. I would probably also try out a different hobby, maybe sew more.

10. What is one question you have always wanted someone to ask you as a performer – and what is the answer? Conversely, what question are you tired of answering?

I would love for someone to ask me if they could deposit a million dollars into my bank account. Obviously the answer is yes. I haven’t gotten to the point where I’m tired of people asking me certain questions yet.

11. Looking back over your burlesque career, is there a single moment or situation you feel was a misstep or you would like to have a “do over”, even if it didn’t change your current situation?

Early on, I did gripe a lot on social media about not being booked for shows. It just lead to some interactions that make me cringe looking back at them. But really, it’s hard to pinpoint anything I want to do over, because all of my experiences, good and bad, have lead me to where I’m at now.

12. What is one thing you still want to achieve in the burlesque world?  At the end of the day, what contribution to the local burlesque scene do you hope you will be remembered for?

I dream of one day opening up my own burlesque rehearsal studio and performance space in Chicago. I want to make stage time more accessible to other artists.