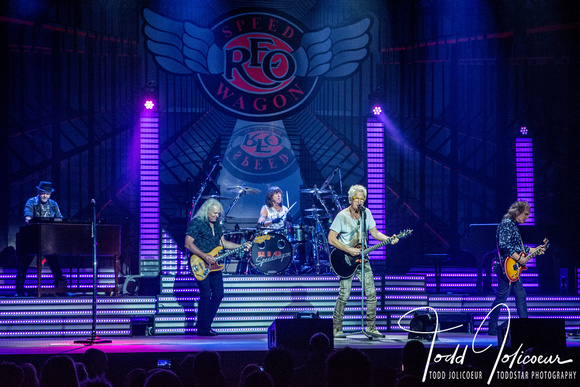 REO Speedwagon delivers song after song, show after show, and year after year.  Almost a year to the day, I was able to hit a local venue with camera in tow and check out the band behind one of my first - and still favorite - albums, 1980's Hi Infidelity.  That album - actually I first owned it on cassette - helped me to see how a rock band could be rock and pop and ballad all in the course of 40 minutes without abandoning their sound and their fans.  Tonight's show kicked off in the same way that disc did all those years ago, with "Don't Let Him Go" getting cranked through the sold to capacity Sound Board's sound system.  The audience jumped in along with the five guys on stage and we all were off to a rocking start.  Next up was "Music Man" and that kept the music flowing and the energy high.  After that another track from that killer 1980 release, "In Your Letter" was unleashed and the crowd sang along with Kevin Cronin and the band was firing on all engines.  It was finally time to put the camera away and just enjoy the show.  The audience was treated to a one-two punch of "Keep Pushin'" and "Can't Fight This Feeling," the latter of which saw Cronin address the crowd for the first time of the evening.  Another classic "Tough Guys" came ripping through the speakers and the crowd was as energized a few songs into the set as they were when the lights first went down.  A couple deep tracks from early in the bands catalog "Son of a Poor Man" and "Golden Country" made an appearance in the set and longtime fans of the band couldn't get enough.  "Take It on the Run," one of the bands Top 10 hits from the previously mentioned 1980 release, got a lot of voices singing along throughout the venue and led into another REO classic, "Time for Me to Fly."  One of the best back-to-back pairings in the setlist brought the rock quotient way up when the band broke into "Back on the Road Again" and "Ridin' the Storm Out." The guitars were perfect, the rhythm section kept perfect time, and the vocals were spot on.  The end of the set featured "Keep On Loving You," which saw lots of hands being held, kisses being shared, and overall moods soaring high.  "Roll With the Changes" was great as usual and led into a surprise cover of Ted Nugent's "Stranglehold," featuring Dave Amato on lead vocals that helped wind down the show.  The band closed out with one of their earliest tracks, "157 Riverside Avenue."  While the setlist from the next night in the venue featured a couple more tracks from the Hi Infidelity record - "Someone Tonight" and "I Wish You Were There," tonight's set gave us all a glimpse of the bands foundation and origins.

Setlist: Don't Let Him Go - Music Man - In Your Letter - Keep Pushin' - Can't Fight This Feeling - Tough Guys - Son Of A Poor Man - Golden Country - Building The Bridge - Take It On The Run - Time For Me To Fly - Back On The Road Again - Ridin' The Storm Out - Keep On Loving You - Roll With The Changes - Stranglehold - 157 Riverside Avenue 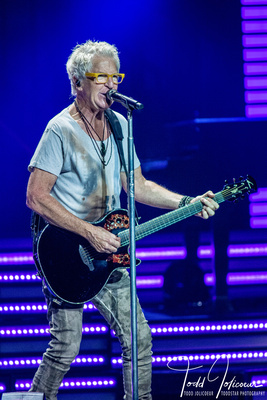