There are legends in rock and roll that I have been fortunate enough to cover - a lot of them are my favorite artists.  There are musical legends that have so far evaded my camera lens, but on July 15 2019, I was honored to witness and photograph a phenomenal live show from the one and only Rosanne Cash when her tour stopped in Michigan at the Royal Oak Music Theatre.  Promoting her latest disc, She Remembers Everything, Ms. Cash and her band took to the stage and wowed the crowd with a killer setlist full of songs from her last two releases, her catalog, and even some fun and cool covers.  Kicking the set off with one of my favorites, "A Feather's Not a Bird," I was ready to dig in and enjoy the evening.  She followed that with two more songs from her 2014 release The River & The Thread with "The Sunken Lands" and "Etta's Tune."  The storyteller-like intro to each of these tracks increased my enjoyment of each and added to the bond between the artist and the capacity audience this evening.  As she kicked into the next phase of the show, she reminded the audience this was going to be a night celebrating her music - especially the latest release.  As the show rolled on, she played a few songs from the disc including "The Only Thing Worth Fighting For," "The Undiscovered Country," and one that I go back to time and time again on the disc, "Particle and Wave."  After introducing the audience to this songs live - some for the first time and others simply a refresher course - Rosanne and band jumped head first into some great covers, including some tracks she recorded for previous albums including "Long Black Veil" and "Sea of Heartbreak" from The List and two cool covers... "Ode to Billie Joe" and The Beatles "Things We Said Today."  With a very tight band backing her, Rosanne nailed two older originals when she pulled "Blue Moon With Heartache" and the title track from an early disc Seven Year Ache.  Cash peppered the back end of the set with more songs from her last two releases, embracing the Americana sound throughout the show when she played the latest releases title track "She Remembers Everything" and "Money Road."  Closing out the show with a cover from her King's Record Shop disc, Rosanne capped the evening with the Johnny Cash penned "Tennessee Flat Top Box."  The crowd left the venue with smiles on their faces and a song on their lips.  Be sure to grab a ticket when this killer show makes its way near you.

Setlist: A Feather's Not a Bird - The Sunken Lands - Etta's Tune - The Only Thing Worth Fighting For - The Undiscovered Country - Crossing to Jerusalem - Not Many Miles to Go - Particle and Wave - Long Black Veil - Sea of Heartbreak - Ode to Billie Joe - Things We Said Today - Blue Moon With Heartache - She Remembers Everything - Everyone But Me - When the Master Calls the Roll - Money Road - Seven Year Ache - Tennessee Flat Top Box 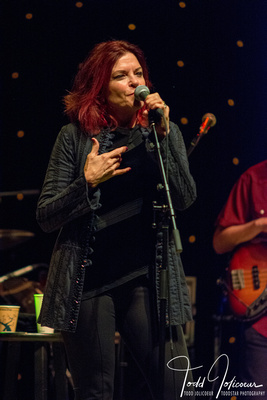