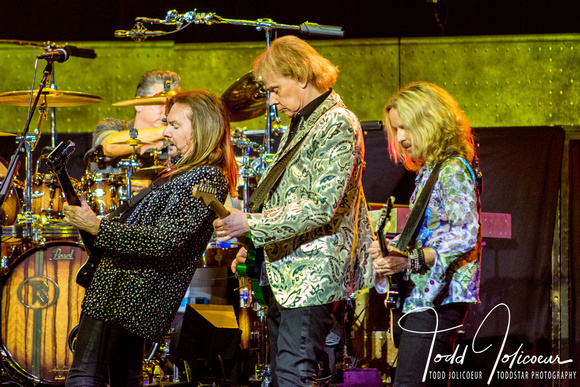 Styx is a band that makes the annual trek through Michigan (I get to see them in different cities every year) and 2019 was no exception when their tour landed them in Detroit at SoundBoard inside Motor City Casino.  As JY mentioned at some point during the show, this was the band's first appearance at the venue - and based on both the bands reactions and those of the capacity crowd, I would bet it isn't their last.  Kicking off the show with high energy, the band tore into one of my favorites of theirs - "Gone Gone Gone."  This track gets the blood pumping, the foot tapping, and  the contagious chorus lends itself to an early sing along.  With the opening number out of the way, the band then leans back into the catalog and hits the crowd with the one-two punch of "Blue Collar Man (Long Nights)" and "The Grand Illusion."  This combination keeps the crowd on their feet and the air filled with singing and good vibes.  The audience came to rock along with the band tonight, as the two fed off of each other all night long.  Next up, the band slowed the set down for a moment to drop the classic ballad "Lady" into the evenings festivities.  The bands most recent release, The Mission, has a few songs in tonight's lineup including the set opener.  Another favorite of mine from the disc, "Radio Silence," made reared its musical head and the crowd seemed to dig it, even if they didn't know it.  There didn't seem to be one moment during this show when the crowd made their beer and bathroom runs - they were riveted by the bands performance and selection of tracks from the minute the band went on until the final note was played and the house lights came up.  There were few surprises this evening as the band stuck to a  minimal new material and relied heavily on their catalog of hits, but that was not drawing any complaints from the audience, as they soaked up all of the arena rock classics the band threw at them when songs like "Fooling Yourself (The Angry Young Man)" and "Rockin' the Paradise" were played to perfection for all to enjoy.  The interplay between the band and crowd during song introductions was fun to be a part of and the band seemed to be enjoying themselves just as much as we were.  Getting anecdotal info about songs, including "Crystal Ball," we were welcomed into Styxworld for the evening and no one was in a hurry to leave.  Other songs dotted the musical landscape for the show, but as the band worked its way toward the end of the set, "Too Much Time on My Hands" drew a big reaction from the audience just before "Come Sail Away" led us to the encore.  The band left the stage momentarily, only to return with two songs the crowd had been waiting for, starting with a song the band hadn't performed for years and drug out of the closet a couple years ago, "Mr. Roboto."  After turning the energy up for that one, the guys had an ace up their sleeve and we all came together to rock the final song of the evening when "Renegade" came blasting through the venues sound system.  Be sure to see Styx as they wind down the final few months of the year and traverse the country bringing their classics to a city near you. 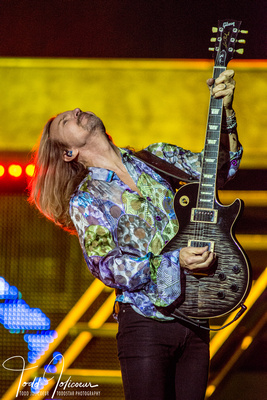