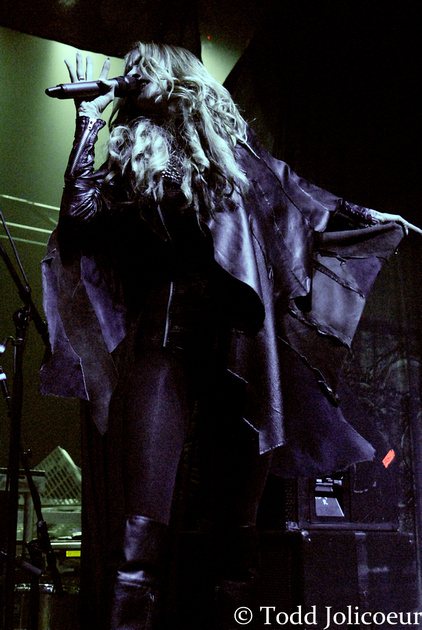 One of the newest bands to hit the metal scene over the last couple years is Huntress.  I still can't put my finger on it, but there is something about the music that drew me in from the beginning when I first heard and reviewed their debut disc Spell Eater.  I made my first Huntress show days after having knee surgery back in 2012.  Having said that, I wasn't sure what to expect live - it was great.  I was able to see them again this summer on the Rockstar Mayhem tour, as they played the Jager Stage.  Another killer show and another killer experience.  Interviewing them was a definite plus that day.  So why rush out to see them a mere three months later?  If you don't know - you obviously haven't seen them yet. 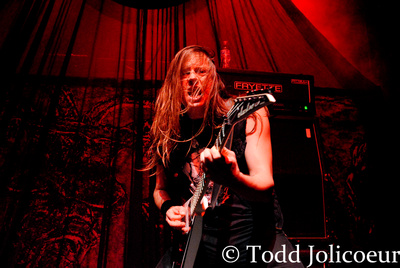 The band hit the stage at 6:40, just as guitarist Blake had indicated to me via text earlier that day.  As the opener, their set list is short, but they well represented their two discs, including three tracks from each disc.  The debut was  covered by "Senicide," "Spell Eater," and set closer "Eight Of Swords" while the latest release, Starbound Beast  (CD Review HERE) was represented by "Destroy Your Life," their latest single "Zenith," and the Lemmy penned track "I Want To Fuck You To Death."  Jill referred to this as one of the most romantic songs ever given to her.  The band was tight and moved seamlessly through the set allowing Jill to throw her vocals over top the wall of sound.  Draped in mostly red or blue light, the band made use of stage area was was smaller and more restricted than the photo pit, with their main goal in mind: win over the crowd and get more rockers into the Huntress coven.  As a fan, I loved the show, but as a photographer and correspondent, I appreciated the show.  These guys rocked with all they had and brought their A game through Detroit on a chilly October evening. 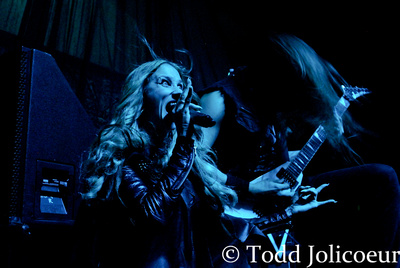 Setlist: Senicide - Destroy Your Life - Spell Eater - I Want To Fuck You To Death - Zenith - Eight Of Swords