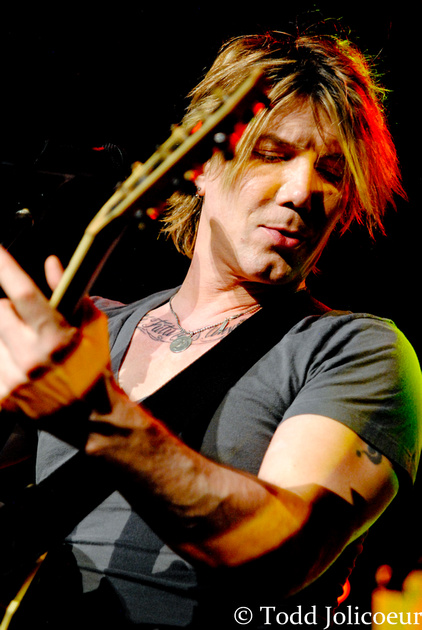 With 27 years under their belts, the Goo Goo Dolls have a lot to prove every time they hit the road, this time to support the 2013 release Magnetic.  When bassist Robbie Takac and frontman John Rzeznik hit the stage, the crowd goes wild and the night begins.  Opening the show with the energetic "Lazy Eye," culled from the Batman & Robin soundtrack, these two, along with their band, takes charges of the DTE Energy Music Theatre stage.  Pulling tracks from six releases, including six songs from the aforementioned Magnetic, the band plays songs sure to please new fans as well as longtime fans.  Arguably the bands biggest release in their career, Dizzy Up The Girl (1998) also featured six songs, including all five singles released and the fan favorite "January Friend."  Remembering their older fans, the band pulled two tracks, "Already There" and "Another Second Time Around" from their 1993 release Superstar Car Wash and two tracks "Naked" and "Name" fromt heir 1995 disc A Boy Named Goo.  As Takac cruised the stage without shoes and Rzeznik played to the crowd with his voice, guitars, and smile, the audience fed off of the music and show.  Making sure to cover the 2000's decade, the bad played tracks from both Gutterflower and Let Love In.  The energy was solid from the moment the band took the stage until the last note of the two song encore was played - even during the ballads and slow tempo rockers.  These guys have performing and pleasing the fans down to a science.  Do yourself a favor and check this tour out - it's a guaranteed fun night out!

Setlist: Lazy Eye - Naked - Slide - Dizzy - Rebel Beat - When The World Breaks Your Heart - Already There - Bringing On The Light - Come To Me - Black Balloon - Stay With You - Here Is Gone - Caught In The Storm - Name - January Friend - Another Second Time Around - Better Days - Slow It Down - Let Love In - Iris - Sympathy - Broadway