Original riot grrrl took the stage on a cool Friday evening in metro Detroit, and she rocked and rolled the place from first punk driven note to the final rocking chord.  Joan Jett & The Blackhearts teased a crowd for roughly an hour opening for Heart tonight and the headliner hard to work hard to equal or eclipse the killer set put on by Jett and her co-conspirators in rock and roll tonight.  This humble rocker, who introduced herself and the band with "We are The Blackhearts" took on songs from her storied career and gave each of them a fresh coat of paint.  Oldeer tracks like "Cherry Bomb" and "You Drive Me Wild" from her days with The Runaways sounded as punky and fun as the originals, but also had a more mature twist to them this many years later.  Playing hits from her catalog, Joan controlled the pace of the show and the crowds enthusiasm.  The crowd and band fed off of each others energy and attitude, leaving everyone more than happy, especially when she rolled newer tracks into the setlist, like "TMI" (a personal favorite from her latest album Unvarnished - reviewed HERE) and "Any Weather."  After witnessing a portion of this show, I cannot wait to see her roll back through town later this year.  Do yourself a favor and check her out on tour NOW. 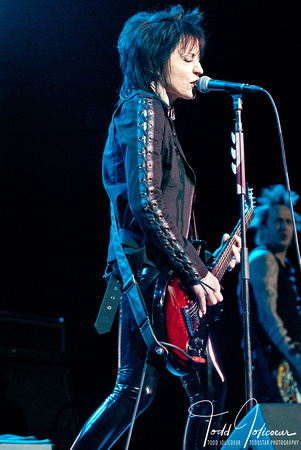 Setlist: Bad Reputation - Cherry Bomb - Do You Wanna Touch Me - TMI - You Drive Me Wild - Light Of Day - Make It Black - Any Weather - The French Song - I Love Rock 'N' Roll - Crimson & Clover - I Hate Myself For Loving You