NEWS: Auction For The Promise Club release animated video for 'You Don't Love Me' 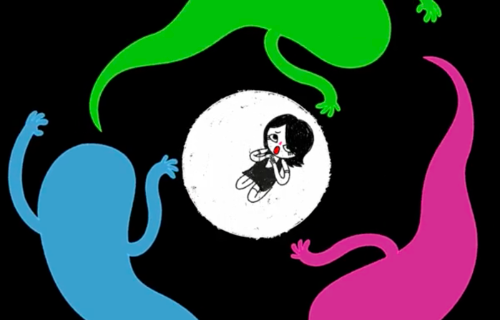 Following the release of their debut album Silence, Cornish trio Auction For The Promise Club have revealed a special animated video for their track ‘You Don’t Love Me’ which is the B-side to their current single ‘See Through’.

‘You Don’t Love Me’ is an edgy indie track with hints of garage-rock and icy pop stylings. It’s accompanied by a fun video produced by the band’s friend Adam Taylor, featuring a girl overcoming the ghosts of a broken relationship.

WATCH ‘YOU DON’T LOVE ME’ HERE

The three-piece are celebrating the release of Silence, which is out now via Easy Action Records’ imprint ZenTen. Formed of 12 tracks it’s a diverse record that captures the band’s eclectic mix of musical styles, drawing on atmospheric and dramatic influences that range from fellow Westcountry bombasters Muse to the romantic sounds of Siouxsie & The Banshees.

It was recorded at Airfield Studios with Paul Reeve (Muse, Supergrass, Beta Band) and features the previous single ‘Moonlight’ along with ‘This May Hurt’ which was dubbed by BBC 6 Music’s Tom Robinson as “their best yet”.

The band have seen extensive support from the likes of Louder Than War, BBC’s Radio 1, 6 Music and BBC Introducing and have appeared at a number of UK festivals including Bestival, Boardmasters, The Great Escape, Y Not Festival, Radio 1’s Big Weekend and Looe Festival and will be performing at this year’s Leopallooza festival on July 30th.