NEWS: Auction For The Promise Club release video for 'See Through' 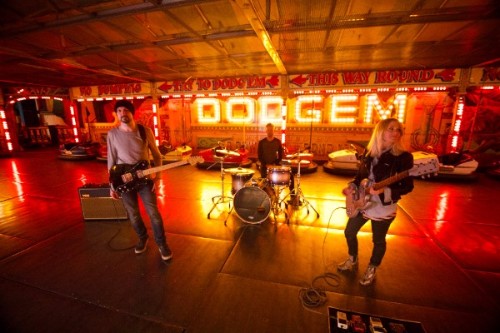 Dynamic indie-rock trio Auction For The Promise Club have released the video for their new single ‘See Through’, taken from their upcoming debut album Silence, out June 9th, which sees the band performing in a unique setting on a dodgems track.

‘See Through’ is a slice of highly-charged rock ‘n’ roll with indie-inspired guitars and sweet, seductive pop-tinged vocals. It follows the previously released single ‘Moonlight’ which received continued support from BBC 6 Music’s Tom Robinson and BBC Introducing Cornwall. Both tracks feature on the forthcoming debut album Silence which was recorded with Paul Reeve (Muse, Supergrass, Beta Band) at the remote Airfield Studios in Cornwall.

Formed of 12 tracks it captures the band’s eclectic mix of musical styles, drawing on atmospheric and dramatic influences that range from fellow Westcountry bombasters Muse to the icily romantic sounds of Siouxsie & The Banshees.

The band, made up of siblings Zoe and Toby White Chambers and friend Perran Tremewan, have appeared at a number of UK festivals including Bestival, Boardmasters, The Great Escape, Y Not Festival, Radio 1’s Big Weekend and Looe Festival and have confirmed a number of upcoming shows in Germany and the UK with more to be announced.