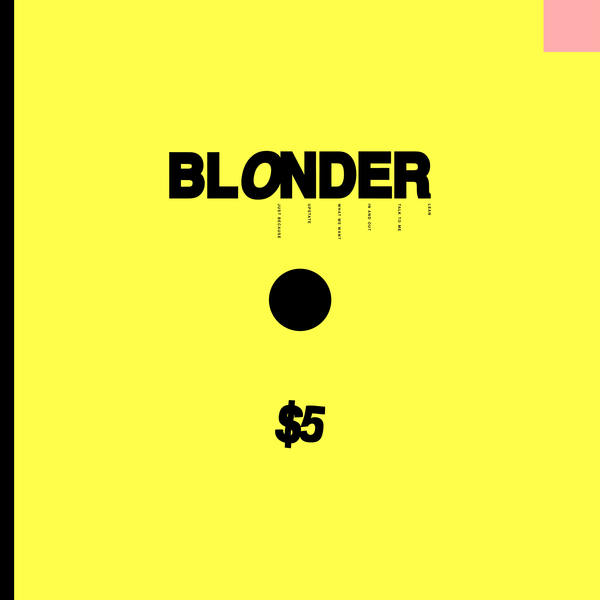 Blonder, the performance alias of the mercurial, NYC-based singer-songwriter Constantine Anastasakis, lives and breathes elegantly yearning melodies and pop song structures. And it’s clear on his debut EP, entitled ‘$5,’ from the taut, bittersweet guitar lines and chunky synth bass running through “Lean” to the clubby New Order-esque synth stabs of “What We Want,” and the tortured guitar scrawls tearing up “Upstate” to the Teenage Dream-like chug of “In and Out.” Written in the throes of a serious relationship that was eroding for months on end, each of the five songs is a “distinct world,” says the singer-songwriter. “It’s about romance and sex, but I want people to see the whole thing, the emotional world that I was in during that time.”

Recorded to two-inch tape at Los Angeles’ legendary Sound City Studios (now Fairfax Recordings), the ‘$5’ EP is a neon-hued collection of edgy confections that often times reflect Constantine’s musical beacons: Lorde, The 1975, and his New York City contemporaries. The wry pathos behind the British act’s lines like “I was thinking about killing myself, don’t you mind?” infuses Blonder’s acute awareness of the emotional subtleties of relationships. “You know just how I’m doing but you ask me anyway,” he drawls on the closing song of the EP, noticing out of the corner of a dry eye the faded leather jacket his former lover left behind.

You can hear the influence of collaborators including Constantine’s good friend Aaron Maine of Porches and soft-lit post-romantics Wet thrumming through the EP’s five songs, but at their emotionally profound core they’re Blonder through and through – a glossy yet gritty reflection of Constantine’s inner landscape and musical sensibilities.

Growing up in Oyster Bay, Long Island, Constantine was first exposed to music through his older sister, starting with a visit to Jim Morrison’s grave grave at Père Lachaise Cemetery in Paris, France. I memorized all the Doors' songs,” he recalls. “I would sing them with my sister for her friends.” Torn between his parents’ careers – an artistically minded mother who worked at a blue chip art gallery and a father who was a florist that firmly believed in stable careers – after his Bard College graduation, Constantine escaped the city whose artists he admired, sequestering himself in Vermont with a friend from school. After teaching himself to play the guitar, and produce in Logic by sampling French jazz and setting it to a beat, Constantine survived a bicycle accident only to endure “the worst pain of his life.” Once again bound to a space smaller than his ambitions, he crafted hundreds of songs that would later shape the glowing coals of heartbreak he mined as Blonder for the ‘$5’ EP.

“That's what characterizes music for me in a huge way,” says Constantine, speaking as much to his universally emotive, gorgeous introduction to the world as to the New York scenes that influenced him. “It’s a once-in-a-lifetime thing, and because it's art it can be more special than an ordinary day, or an ordinary moment.”