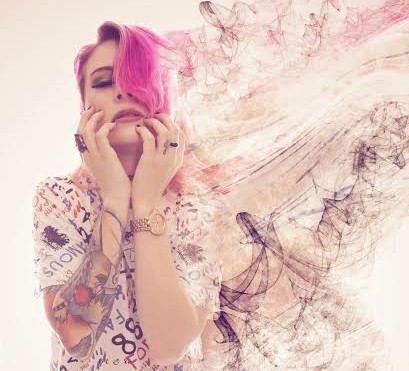 Whitney Peyton is known for her hard work and dedication to touring. She is stoked to announce this fall will be no exception as she will be heading out with Twiztid on the "Mostasteless Tour 2017."

Having worked with Twiztid before, both in the studio and on a previous tour, doing a national tour together was inevitable. Whitney shared,"After doing a small run with Twiztid and Blaze years ago in Canada, as well as appearing on several tracks, spot dates, and festivals with them, I feel like a full national tour is long overdue. This run also includes Moonshine Bandits, adding their country flavor to create a buffet of dopeness for your rap loving palates."

The line up fuses together sub genres of rap as each artist on the tour is unique from one another and this gives fans a little bit of everything. As Whitney explains, "Every artist on this bill has a different and energetic stage presence, so listening to the records is simply not enough. Come out and experience Where It All Began!"

The tour kicks off on September 8th in Cleveland, OH and the first leg wraps up on October 31st with a Halloween show in Saguet, IL with more dates to be announced soon.

More about Whitney Peyton: If artists like Machine Gun Kelly, Eminem, and Missy Elliott miraculously had a pale love child that somewhat resembled Hayley Williams of Paramore, she would be just like Whitney Peyton. W.P. is a unique emcee, with a firecracker personality, hailing from the outskirts of Philadelphia, PA. Beginning close to home she became, and generally still holds the #1 spot on The Hip Hop Charts on Reverbnation.com in Philadelphia. Her continuous drive has also gained her several nominations (and wins) at the Lehigh Valley Music Awards (PA) for categories including “Best New Artist”, “Best Lyricist”, “Best Live Performer”, “Best Female Solo Artist” and “Best Hip Hop Performer” from 2010 through 2014. Whitney was nominated in the 2014 Tri-State Indie Music Awards (PA, NY, NJ, DE, MD) for “Emerging Hip-Hop Artist of the Year” and won.

Equipped with catchy hooks and relatable rap verses, she is the top voted unsigned artist in her home state on MTV2’s “On The Rise” contest and has been interviewed and played on numerous independent, college, and online radio stations. With no label or management, the rapper has also landed various TV spots, swept the pages of multiple magazines and music blogs internationally, as well as accumulated over 1 Million+ total YouTube views on her channel.

Despite her edgy image and attitude, Whitney was chosen to be one of the faces of Philadelphia’s “Unlitter Us” Campaign in 2010. TV spots for the campaign aired city-wide (and in surrounding areas) through 2011 on stations such as MTV, BET, Vh1, Comedy Central, ABC, and NBC. Whitney was featured using her rap ability in a spoken word poem she wrote about cleaning up the city streets. She also appeared in print and transportation ads, while additionally being seen alongside Philadelphia Mayor Michael Nutter at anti-litter rallies, and community events.

Further proving her versatility as an artist, W.P. took part in writing and recording on an Anti-Bullying album geared toward Children in late 2011. The album gained immediate recognition winning a Grammy Award for “Best Children’s Album” at the 54th annual Grammy Awards in 2012 as well as a Nappa Honors Award, and Parent’s Choice Gold Award from the Parent’s ChoiceFoundation.

Whitney’s perseverance, and rapidly growing fan base earned her spots on both a full Canadian tour with Twiztid as well as a 40-date USA tour with rap legend, R.A. The Rugged Man (of Nature Sounds), and Potluck (of Suburban Noize) in 2013. In 2014 she continued her momentum on a 60-date National Tour with Oscar Winning rap group Three 6 Mafia (now known as Da Mafia 6ix) followed by a run as direct support for highly controversial electronica group Blood on the Dance Floor. Never missing a beat, Whitney Peyton is taking 2015 by storm by headlining her own touring dates while working on new music and visuals.

Despite her many hard-earned accolades W.P. still considers herself an “Underdog” in many ways. Having achieved so much independently, with an image not easily associated with hip-hop, it’s easy to tell that her fans appreciate her home-grown attitude and “Team Underdog” movement. After releasing several free EP’s she dropped what she considers her debut album, “On The Brink” last year (Jan. 2014). “On the Brink” features well-known acts from both the mainstream and underground and sold several thousand units worldwide with no official distribution! As a gift to her fans W.P. released a free EP entitled “Fear of Falling” this past March 2015 as an appetizer for a full-length album set to release later this year. If this biography is your first time seeing the name “Whitney Peyton” keep your eyes open because it won’t be the last.