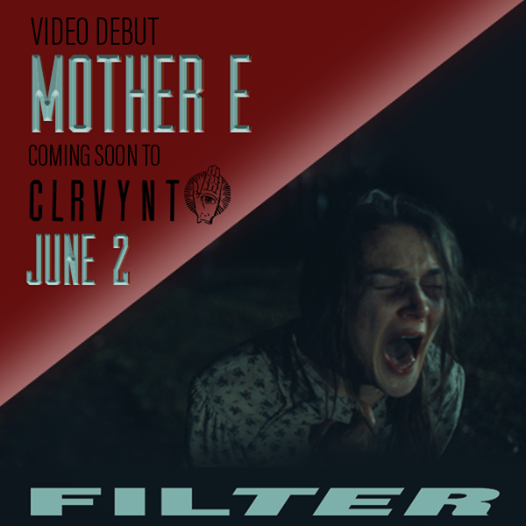 FILTER has always been about defying expectations and making strong statements.  Frontman / Mastermind, Richard Patrick has sounded off on many timely topics of late, none more powerful than the statement “Mother E” makes about anger and hate in people’s hearts. “Mother E is the sound of what I call ‘real life horror.’ People that show up at a pre-school, movie theater or church firing a semi-automatic (to somehow silence the voices in their heads) scare me more than some movie monster. Real life horror is what makes me write many of FILTER’s songs.” “Mother E” comes from the band’s current album, CRAZY EYES, Patrick commissioned an epic video for the compelling track.

The haunting video was directed by Polish director Lukasz Pytlik.  "When we first talked with Richard about making the video for ‘Mother E,’ I immediately saw the song’s potential to tell a story that is not only brutal and unforgiving but also one that carries a message and is full of emotions,” explains Pytlik.  “When working on the script, I knew that I had to make it about a subject that I could relate to. As a history buff, I wanted to tell the story of what happened during WWII when the Russian army was supposed to be our ally and free Poland from the Germany's occupation. What happened was not what was supposed to. Many of the Russian soldiers, raped, mutiliated and even killed Polish women. That was our canvas for the rape & revenge story we tell in the video. BUT: is it truly happening or is it happening in someone's tormented mind? That's up to viewers to decide."

Patrick has been doing more than showing his disdain for The Chainsmokers’ fake live performance on SNL HERE  and recounting Chris Cornell’s influence on his life HERE .  He has worked on scoring films like LAST RAMPAGE: THE ESCAPE OF GARY TISON  and TRUE CRIME and is currently working on a new record in a completely different genre – ambient music.

This fall will likely see the DVD/Album release of CRAZY EYES OF AMERICA – a recording done in 2016 of the band’s powerful live show.

As for upcoming dates in the US, the band has the following scheduled thus far...

For more on FILTER, including international tour dates, go to: