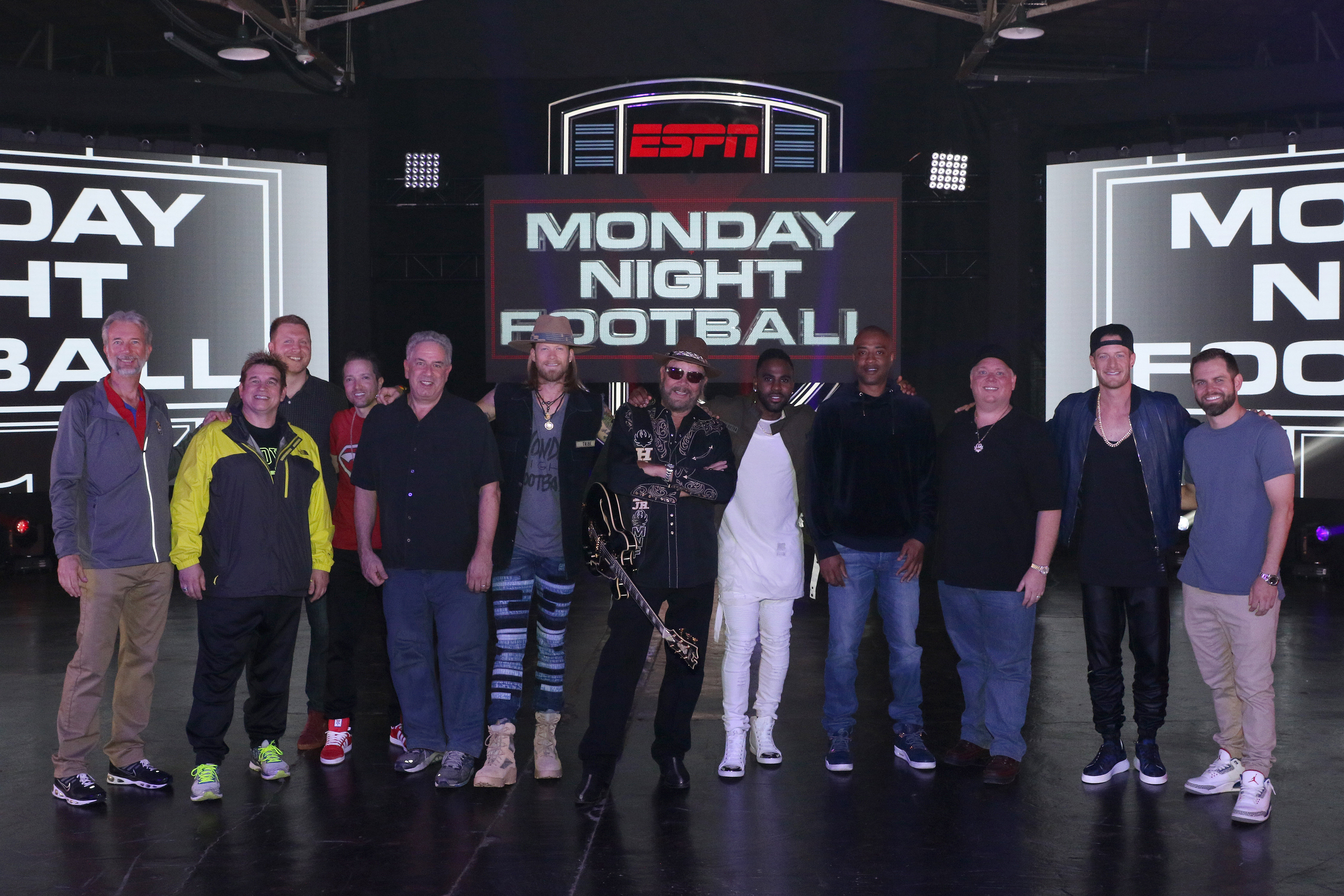 NASHVILLE, Tenn. – ESPN’s Monday Night Football will feature the return of its iconic anthem this fall when legendary country singer Hank Williams Jr. kicks off the weekly Monday primetime game by asking NFL fans: “Are You Ready for Some Football?” Every Monday night during the 2017 NFL season, Williams will perform his hit song “All My Rowdy Friends Are Coming Over Monday Night” with superstar duo Florida Georgia Line and multi-platinum recording artist Jason Derulo.

Williams returns to MNF for the first time since 2011 to perform the show’s opening anthem for an unprecedented 24th season, a ritual that has earned him four Emmy awards (1991-1994) and national acclaim among legions of football fans. Florida Georgia Line and Derulo will be appearing in the MNF video for the first time.

"Monday Night Football has the most famous music video in sports television. It’s time to bring it back," said Stephanie Druley, Senior Vice President, ESPN events and studio production. “The combination of Hank Williams Jr. with Florida Georgia Line and Jason Derulo will get fans excited and ready for kickoff every Monday night on ESPN this fall.”

The MNF kickoff video features team-specific lyrics and visuals each week based on the 17 regular-season ESPN matchups. All three artists recorded audio tracks in May. They filmed the opening video together June 4 at the Marathon Music Works in Nashville.

“I started in 1989 when ABC was celebrating the 20th season of Monday Night Football," said Hank Williams Jr. “It soon became a staple that fans grew to expect and wanted to see and hear. I am thrilled to be back and bring the fans such a new and dynamic rendition of this anthem. Are You Ready For Some Football? Cause I sure am!”

"This is a huge honor to be a part of such a legendary song and night!" said Florida Georgia Line’s Tyler Hubbard.

FGL’s Brian Kelley added: "We all grew up watching Monday Night Football and it's surreal to join Jason Derulo and Hank Williams Jr. on this new version that gives a nod back but also a step forward!"

Said Derulo: “It’s truly momentous to be featured in the Monday Night Football anthem for the upcoming season. I feel the opening song sets the tone and energizes the fans before kickoff, and this year I’m putting my swag on it.”

About Hank Williams Jr.: Marking 53 years since his first album in 1964, Hank Williams Jr.'s impressive resume has spawned 70 million albums sold worldwide, six PLATINUM albums, 20 GOLD albums, 13 No. 1 albums and 10 No. 1 singles. As groundbreaking as Hank Williams Jr. became, it wasn't just his performance that people took note about, but rather his songwriting that became so notable. The driven musician penned hit songs year after year scoring 20 BMI Awards. One of the most-heard Country songs of modern times, the four-time Emmy award-winning “Are You Ready For Some Football?,” which was heard nationally for the first time in 1989 during the 20th anniversary season of Monday Night Football on ABC and soon became the theme song of ABC and ESPN’s MNF telecasts, aired for 21 years. Through the years, the MNF open has featured Williams in a variety of settings: cruising the highway in a convertible with Dallas Cowboys cheerleaders, tap-dancing with famed dancer Savion Glover, performing alongside an all-star band, even flying through outer space.

Williams continues to add accolades to his resume, which includes three ACM Entertainer of the Year honors, two CMA Entertainer of the Year honors and the BMI Icon award in addition to winning a GRAMMY and being inducted into the Nashville Songwriters Hall of Fame. As a touring artist, Hank Jr. was a pioneer in bringing arena rock production values to country music, and he remains one of the most consistent ticket sellers in music, period, as generation after generation gets turned on to one of the most dynamic live performers ever to take the stage.

About Florida Georgia Line: FGL’s musical evolution DIG YOUR ROOTS propelled the history-making duo to #1 on the all-genre Billboard Artist 100 and Country Albums charts, delivering the 3X PLATINUM-certified lead single “H.O.L.Y.” and PLATINUM-certified hits "May We All” featuring Tim McGraw and “God, Your Mama, And Me” featuring Backstreet Boys. Following a landmark DIG YOUR ROOTS TOUR that broke attendance records and played to over one million fans, FGL will continue to dominate on the road this summer with THE SMOOTH TOUR 2017, including hip-hop icon Nelly and breakout country talent Chris Lane. Pop idols Backstreet Boys will also join FGL for their first-ever headlining stadium shows in Boston (7/7), Minneapolis (7/29) and Chicago (8/12). Since introducing their breakout vibes in 2012, FGL has earned prestigious honors from the AMA, ACM Awards, CMA Awards, Billboard Music Awards and CMT. Their previous BMLG Records releases – 2X PLATINUM debut HERE’S TO THE GOOD TIMES and PLATINUM ANYTHING GOES – have attributed to sales surpassing 29 million tracks and more than 3.5 million albums worldwide. Fueled by fresh inspiration, they launched publishing company Tree Vibez, introduced their Old Camp Pecan Whiskey, and opened premiere restaurant and entertainment destination FGL HOUSE.

About Jason Derulo: Singer, songwriter, and dancer Jason Derulo is a multi-faceted, timeless entertainer. To date, he has achieved two RIAA platinum albums, Jason Derulo (2010) and Talk Dirty (2014), two gold albums Future History (2011) and Everything Is 4 (2015), and a gold EP Tattoos (2013) — totaling over 12.5 million albums sold globally. A multiplatinum powerhouse with 94 million-plus single equivalent sales worldwide (5.5 billion streams and 58 million downloads), both his introductory breakout “Watcha Say” and “Talk Dirty” [feat. 2 Chainz] reached quadruple-platinum status, while “Want To Want Me” and “Ridin’ Solo” went triple-platinum, and “Trumpets,” “Wiggle” [feat. Snoop Dogg], and “In My Head” earned double-platinum certifications. Platinum singles include “Marry Me,” “The Other Side,” and “It Girl,” while “Get Ugly” and “Don’t Wanna Go Home” went gold. Cumulative streams continue to soar, exceeding 5.5 billion and YouTube views surpass 3 billion. At radio, his music impacted a total audience of 20 billion-plus listeners with a staggering 3.5 million spins. He landed four #1 songs on the Billboard Hot 100, six Top 5 songs, and 11 Top 10 songs.

Whether it’s hosting the hilarious “Toddlerography” on The Late Late Show with James Corden or cameoing on Empire or Lethal Weapon, Derulo has become embedded in the fabric of pop culture. He was on the cover of Billboard Magazine in addition to appearing in Time, People, Men’s Fitness, USA Today, Entertainment Weekly, Elle, Forbes, and LA Times as well as guest appearances on The View and The Meredith Vieira Show. He’s received three Teen Choice Awards, two BMI Pop Awards, and a YouTube Music Award. Derulo proudly stands among history’s most successful artists, and he turns up the heat in 2017 with the explosive new anthem, “Swalla” [feat. Nicki Minaj & Ty Dolla $ign].