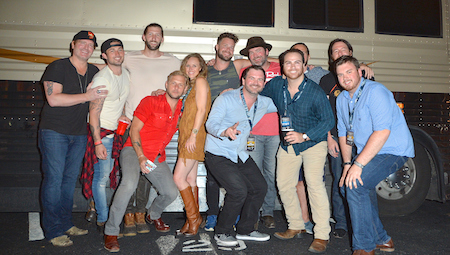 NASHVILLE, Tenn. (June 7, 2017) -- Lewispalooza No. 7 was held on June 6 outside Tin Roof Demonbreun and raised funds for Hope Song, a non-profit using music to help give cancer patients hope. Lewis Brice and friends played host to a crowd of fans and industry alike through the nearly six hour concert  that has become a go-to event leading up to CMA Fest. Performing guests included Jerrod Niemann, Michael Ray, American Young, Love and Theft, Kristen Kelly and many more. Lee Brice showed up for a special performance of his new single "Boy" during Niemann's set.

Lewis, who started Lewispalooza in 2010 to benefit local charities, previewed songs from his upcoming self-titled debut EP. Brice defies genres with his country-rock sound and continues to receive rave reviews for his live shows across the country. The EP is available for preorder now HERE and at lewisbrice.com.

About Lewis Brice: With a sound rooted at the intersection of country, rhythm & blues and southern rock, Lewis Brice comes at you with high-energy stories, sounds that catch the ear and beats that make you want to move. Born and raised in Sumter, South Carolina, he grew up singing in church choir and praise bands. Throughout his career he has spread his music in front of attentive audiences and continuously grown a strong fan base while playing shows with many talented artists he admires such as Lee Brice, Randy Houser, Jerrod Niemann, The Cadillac Three, Chase Rice and many more.

Lewis made headlines with 2010's “Ordinary Girl,” co-written with Dallas Rogers, which made a small window on the Mediabase charts and reached #67 on the iTunes Country Music chart. He appeared in CMT’s first season of "Can You Duet,” coming in 8th place out of the thousands who auditioned. Additionally, Lewis took on the lead role in the 2014 ACM Song of the Year music video for “I Drive Your Truck,” performed by his brother Lee Brice.

About Hope Song: Founded in April 2016 by John Wesley Satterfield and Coby Sherlock at Chipsa Hospital in Playas de Tijuana, Hope Song continues to support the patients at the hospital while they undergo extensive alternative treatment for cancer. Hope Song arranges for two to three artists to travel to the hospital from Nashville every week to perform for the patients each night. Their vision is to provide funding for cancer treatment to those who cannot afford it in the future.