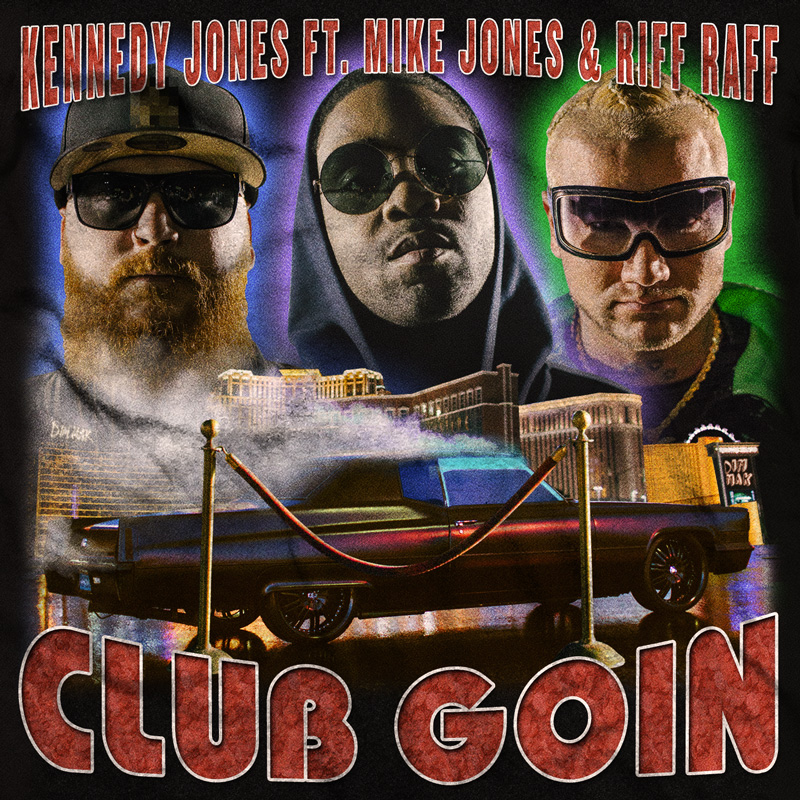 Los Angeles, CA – Two of Houston's finest rappers, Mike Jones (who?) and Riff Raff, join LA's Kennedy Jones on a mission to bring turn-up anthems back to the club with "Club Goin." Shot in Las Vegas, the official music video features all three artists in a wild night at the club, as well as a cameo by Dim Mak boss Steve Aoki.

Kennedy Jones’ journey from a troubled teenager bouncing around Orange County, saved by the power of public school music classes, to modern dance floor destroyer is the stuff of legends. Through experiencing the tragic losses of his loved ones at young ages and overcoming his own addictions, Kennedy Jones offers the dance music world a multifaceted reality, one based a commitment to truth seeking and a deep respect for the diversity of people and cultures around the world.

Before internet virality was a thing, Mike Jones did the unthinkable by taking his name to the streets with t-shirts proudly advertising his real phone number and answering calls from fans. He took the world by storm with his Swishahouse album Who Is Mike Jones?, which debuted at #3 on the Billboard Top 200 and was certified Platinum in just two months. Boasting classic singles “Still Tippin’ (Feat. Slim Thug and Paul Wall)” and “Back Then,” Mike Jones instantly became one of Houston’s most iconic hip hop personas, with fans to this today still able to cite his phone number (281-330-8004). After achieving viral status in 2005, the answer to the question, “Who?” still resonates with many. Mike Jones has resurfaced once again and is currently working on his Money Train: Reloaded mixtape and touring major cities around the world. Check out his recent performance at Boiler Room’s monumental Houston rap takeover.

Riff Raff is truly one-of-a-kind, flamboyant in dress and boisterous in nature, despite his small town upbringing in Katy, Texas. He has been making waves ever since his first studio album Neon Icon debuted at #22 on Billboard’s Top 200 in 2014. He has collaborated with A-list artists including Katy Perry, Wiz Khalifa, Gucci Mane, Skepta, Quavo, Chief Keef and many more. Riff Raff has since dropped his twelfth mixtape Aquaberry Aquarius earlier this year and is currently on his fifth tour (first world tour), making rounds through Europe, New Zealand, Australia and beyond, supported by manager Dj Afterthought.

ABOUT DIM MAK: In 1996, Steve Aoki founded DIM MAK and developed it into an influential independent record label and music lifestyle brand. Responsible for launching the careers of seminal acts such as Bloc Party, The Bloody Beetroots, The Chainsmokers, Deorro, Keys N Krates and countless others, the independently owned DIM MAK has consistently pushed new musical movements via its staunch DIY ethos. With a back catalog hundreds of records deep, a history of legendary live events, and a fully formed clothing line, Dim Mak continues its global mission of promoting boundary-pushing music and culture ‘by any means necessary.’