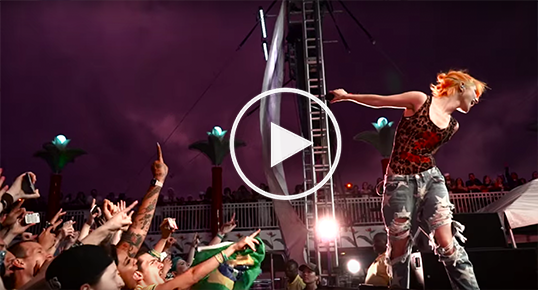 ATLANTA, GA – PARAMORE’s one-of-a-kind vacation experience, set to sail April 6 – 10, 2018, with the band’s third installment of the massively popular PARAHOY! has sold out in record time for the second consecutive year, but hopeful fans can join the wait list at Parahoy.com.  Presented in partnership with Sixthman, the industry leader in music festivals at sea, the interactive, four-day music festival at sea will sail from Miami, Florida to Nassau, Bahamas. Orlando-based music management company Fly South Music Group manages Paramore and United Talent Agency (UTA) brokered the deal on behalf of the band.  Fans who acted early will enjoy an acoustic mini-set by Paramore in the main theater and more unforgettable moments on board.

PARAHOY! first embarked in 2014 with a star-studded line-up featuring Tegan & Sara and New Found Glory, and returned in 2016 with 2,600 devoted fans and special guests CHVRCHES, Lights and more. 2018’s third sailing is a marquee stop on Paramore’s 2017-18 World Tour (find announced dates at paramore.net) and will include performances from an array of special guests, all hand-picked by PARAMORE, to be announced in the coming months. Other shipboard events will include Q&A session, theme nights, and of course, “Paraoke” with the GRAMMY® Award-winning band themselves. For full details and reservation information, please visit parahoy.com.

A destination of her own, Norwegian Jade offers guests Norwegian Cruise Line’s signature freedom and flexibility to enjoy 11 onboard bars and lounges, 15 dining experiences, one outdoor pool, hot tubs, and a full menu of spa treatments. Enjoy duty-free shopping and awe-inspiring architecture in beautiful Nassau. Explore your adventurous side diving into the crystal blue water with dolphins and colorful fish, or try your luck in a casino.

For more information about joining the wait list, visit us online at parahoy.com or call Sixthman directly at 877-379-9186 between the hours of 10AM and 6PM ET.

PARAMORE’s brand new album After Laughter is available now.  Their first full length release since 2013, the global band’s highly anticipated fifth studio album features their latest hit single “Hard Times,” which was released last month and has already amassed 33 million views for the music video. After Laughter debuted at #1 on Billboard's TOP ROCK ALBUMS and ALTERNATIVE ALBUMS charts and was met with much critical acclaim including “Best Albums of 2017” coverage in SPIN, STEREOGUM and BILLBOARD.  For the latest information on PARAMORE, please visit Paramore.net.

ABOUT PARAMORE: Paramore – 4x GRAMMY® nominees and winner of the “Best Rock Song” trophy at the 57th Annual GRAMMY® Awards – have long established themselves as international rock superstars.  Their previous self-titled album “PARAMORE” made a chart topping debut atop the SoundScan/Billboard 200 upon its release marking Paramore’s first #1 album to date and featured two 2x RIAA platinum-certified hits, the top 10 “Still Into You” and the #1 smash, “Ain’t It Fun.” Paramore has had a truly remarkable run of RIAA certified albums and singles since coming together in Nashville in 2004, from 2005’s gold-certified debut, “ALL WE KNOW IS FALLING” and 2007’s 2x platinum-certified breakthrough, “RIOT!” (with its 3x platinum-certified hit, “Misery Business,” as well as the platinum-certified singles “crushcrushcrush” and “That’s What You Get”) to 2008’s worldwide platinum “Decode” (from Chop Shop/Atlantic’s chart-topping “TWILIGHT – ORIGINAL MOTION PICTURE SOUNDTRACK”) and 2009’s platinum-certified “brand new eyes” and its GRAMMY®-nominated smash, “The Only Exception.”  Long regarded as an exhilarating live act, Paramore has spent much of the past decade-plus on the road, with highlights including sold out headline arena tours and show-stealing festival sets around the globe. Paramore has consistently drawn both critical acclaim as well as a wide ranging list of international honors and accolades, now including a GRAMMY® Award, two People’s Choice Awards, three NME Awards, three MTV Video Music Award nominations, and much much more.