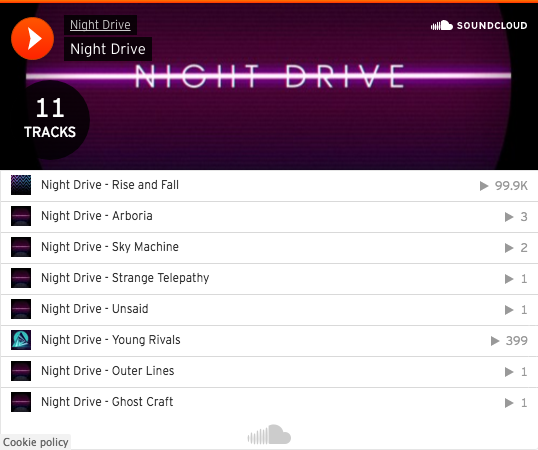 Texas based electronic art-rockers, Night Drive arrive today with their expansive debut self-titled album via Roll Call Records. Like a synesthesia-induced soundscape found within the vivid worlds of films a la Tron or The Neon Demon, the record is a staggering achievement for the duo.

Night Drive's self-titled debut album brings to mind the aesthetics of acts like Interpol or The Knife, and is an effort best consumed in it's entirety. From the John Carpenter-esque stylings of hazy album opener, "Hyperion" to the urgent synth of "Strange Telepathy" or the slow-burning and subtle "Ghost Craft," from start to finish, the LP is a textured soundscape and surreal journey through sound.

With a handful of tracks and playful remixes, Night Drive's debut LP has garnered attention from the likes of Electronic Musician, Earmilk, Billboard, PAPER Magazine and more as well as seeing the duo hit the top of the HypeMachine charts on several occasions.

Comprised of Rodney Connell and Brandon Duhon, the duo elaborate on the meaning behind the record "This album was largely inspired by a collection of films (and other non music-related art) that we were into when the band first began," explains Duhon. "Although it’s not a concept album, a few common themes seemed to emerge as the songs took shape. These themes revolved around the feelings that accompany a dystopian or uncertain future, either on a personal or universal level. Within this kind of bleak feeling is a thin line of exploration or searching - is there is a way to put the pieces back together, or does one just escape?"

Having recently toured with the likes of CHVRCHES, Austra, Yacht, Robert DeLong, and Miami Horror, Night Drive has several dates coming up in Houston, Dallas and Austin.