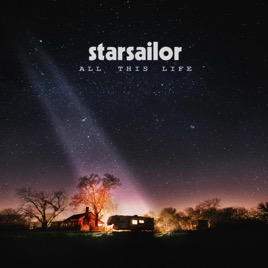 British quartet Starsailor, have announced their brand new album All This Life, set for both physical and digital release on September 1st via Cooking Vinyl. The triumphant lead track ‘Listen To Your Heart’ is now available to stream HERE.

Starsailor today also announce a full UK headline tour (see details below). Fans who pre-order All This Life now from the Official Starsailor Store on the band’s website will get exclusive access to the tour presale, and also be able to download ‘Listen To Your Heart’ as an instant grat. Exclusive signed items and special bundles are also available through the store HERE.

‘Listen To Your Heart’ is the stellar opening track from the album. Lead singer & guitarist James Walsh describes it as, “an energetic, emotional song. I think in doing what we do, you have to be emotion and instinct lead. If every decision was sensible, practical and mulled over, we'd never have done anything or got anywhere. It’s not always easy, so you have to keep reminding yourself.”

Of the album and recording process, Walsh says; “Recording the album was an intense and rewarding experience and we're excited to get it out there. There's a good mix of the aspects of the band people know and love, and a few changes in direction.”

Their fifth studio album – and first since 2009 – All This Life finds Starsailor re-energised and on outstanding form. They played to an ecstatic crowd in a packed Big Top Stage at this year’s Isle Of Wight Festival and debuted a new track from the forthcoming album.

Starsailor play British Summer Time at Hyde Park today alongside Phil Collins, Blondie and more, as well as Hope & Glory Festival in Liverpool in August.  They set out on a 12 date headline tour of the UK in October – see full tour dates below.

Pre-order All This Life now and stream/download ‘Listen To Your Heart’ HERE.

‘ALL THIS LIFE’ TRACK LISTING:

Signing to EMI Records, they shot to fame with their debut album Love Is Here in 2001. Featuring the Top 10 single ‘Alcoholic’, the album was released to great critical acclaim and reached Number Two in the UK Album Charts going on to sell over half a million copies in the UK alone.

Further albums On The Outside (2005) and All The Plans (2009) followed, with the band chalking up ten Top 40 hits in total, before the band went on an extended hiatus to explore other projects.

Reconvening in 2014, Starsailor headed out on a Greatest Hits tour in 2015 following the release of Good Souls: The Greatest Hits. The band have supported the likes of The Rolling Stones, The Police, The Killers, and U2, during their career selling over 3 million albums worldwide.