NEWS: "THE BIG INTERVIEW" with Dan Rather to Feature Dolly Parton, Meat Loaf And More 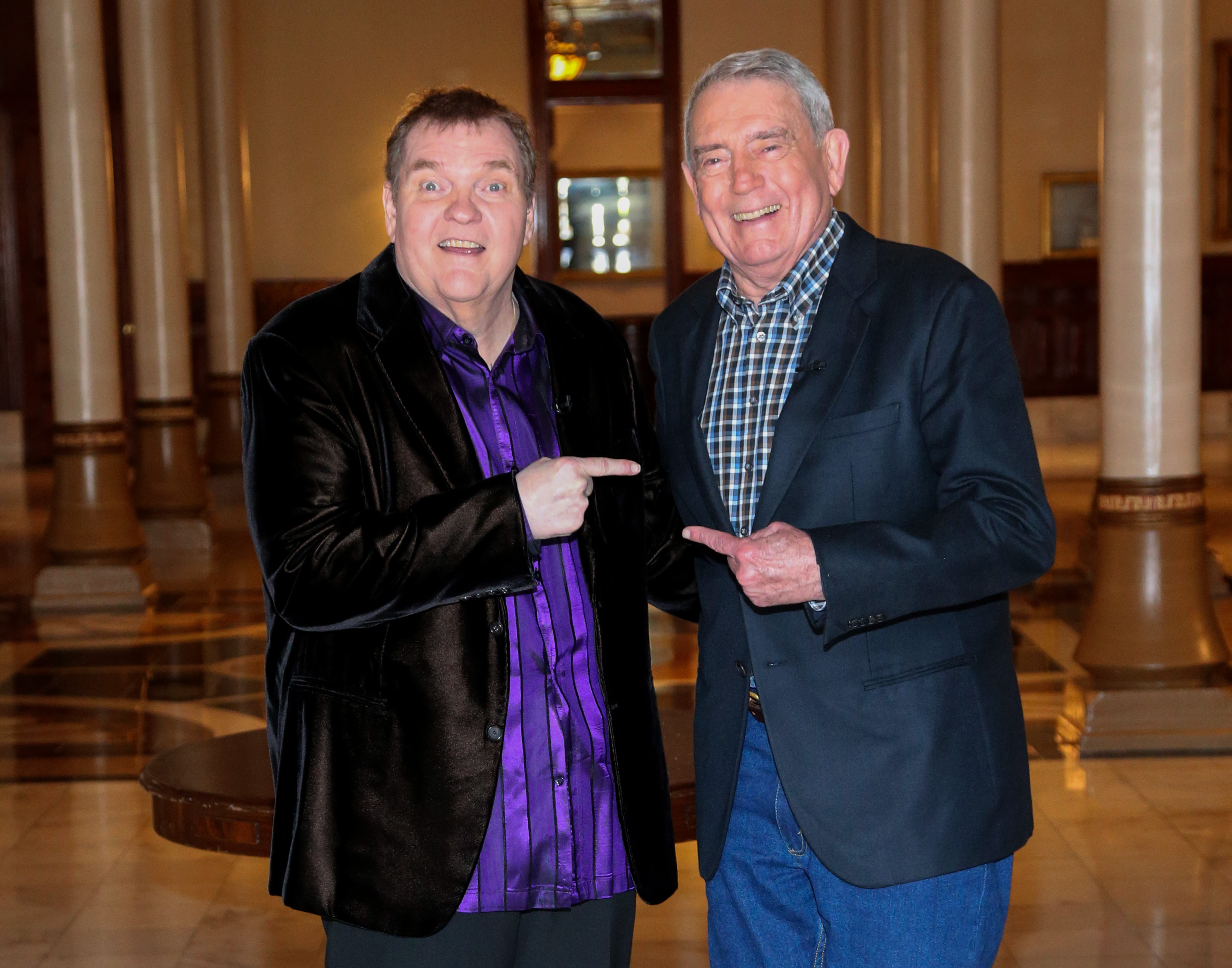 NASHVILLE, Tenn. – Upcoming episodes of the AXS hit show “THE BIG INTERVIEW" with Dan Rather will feature some of the biggest names in music throughout the month of June. Interviews include Kid Rock, Charley Pride, Meat Loaf, Kenny Rogers, Dolly Parton and more. Don’t miss as each star sits down for an hour-long interview with host, Dan Rather, to discuss and relive some of their biggest career defining moments. Aired nationally, “THE BIG INTERVIEW" features thought-provoking, in-depth interviews with some of the most talented artists from across the entertainment industry. Fans can find future airings and purchase episodes in-full HERE.

Groundbreaking country music icon, Tanya Tucker, joins Dan Rather on “THE BIG INTERVIEW” for an intimate hour-long discussion. The beloved singer, songwriter, and former child star opens up about her battle with depression, overcoming a disfiguring chemical peel in 2008, and how her faith has helped her heal. Tune in for Tucker’s interview Thurs., June 15 at 9 a.m. ET.

GRAMMY®-winner Charley Pride speaks with Dan Rather for a detailed interview set to re-air on June 15 at 10 a.m. ET. During the candid hour-long conversation, the beloved country music pioneer opens up about his early life as one of 11 children, picking cotton in the fields of the Mississippi Delta, as well as his introduction to music, the songs that inspired him, and his first guitar.

Meat Loaf visits with Rather for a closer look into his musical talents on “THE BIG INTERVIEW.” The unique artist discusses his album Braver Than We Are and speaks about topics including his music, the success behind it all, and the heart of his career. Meat Loaf’s in-depth discussion will re-air on Sun., June 18 at 9 a.m. ET.

Charlie Daniels sits down with Rather for an intimate and in-depth interview at Daniels’ recording studio in Mt. Juliet, Tennessee. In the candid discussion, Daniels opens up about his youth in the Civil Rights Era south, breaking into the competitive Nashville scene, his signature hit “The Devil Went Down to Georgia,” life on the road and more. Catch his interview Wed., June 21 at 9 a.m. ET.

GRAMMY®-winning songstress Crystal Gayle sits down with Dan Rather and opens up about her celebrated career, her most enduring songs, and her relationship with sister - and fellow superstar- Loretta Lynn, among other topics. Gayle’s episode will re-air Fri., June 23 at 9 a.m. ET.

Country music icon, Kenny Rogers, visits Dan Rather on “THE BIG INTERVIEW” for an exclusive interview. The two discuss Rogers’ groundbreaking career and the feeling of what it is like to be inducted into the Country Music Hall of Fame. During his in-depth interview, the ‘The Gambler’ artist allows a closer look into his career and shares the basics of where it all began for him. Catch Kenny Roger’s interview Sun., June 25 at 9 a.m. ET.

The legendary Dolly Parton sits down with Dan Rather on “THE BIG INTERVIEW” to discuss all the important moments of her distinguished career — from her diverse music and acting career, to running a multi-million dollar business with a touch of her devotion to the philanthropic foundation, Dolly Parton’s Imagination Library. The two also look into Parton’s personal life. Be sure to tune in for the interview Sun., June 25 at 10 a.m. ET.

About Tanya Tucker: In 1974, Rolling Stone ran a cover story on Tanya Tucker with the headline that said “You’re Gonna Hear From Me.” Truer words have never been spoken. The country music icon's sultry voice and vivacious stage presence makes her one of the most admired and respected female vocalists in the country music genre. Tanya’s reign includes 23 Top 40 albums and a string of 56 Top 40 singles, 10 of which reached the No. 1 spot on the Billboard charts. Along the way, she has provided some of the biggest country music hits of each decade, including, "Delta Dawn," "Soon," “Two Sparrows in a Hurricane,” “It’s a Little Too Late,” "Trouble" and “Texas (When I Die),” just to name a few. Tucker is also the recipient of numerous awards, including two CMAs, two ACMs and three CMT awards. In August 2016, the Academy of Country Music honored Tucker with the Cliffie Stone Pioneer Award during the 10th Annual ACM Honors™. All-inclusive sales of singles, albums, hits collections and digital downloads have topped 25 million records worldwide. For more information, visit TanyaTucker.com.

About Charley Pride: Charley Pride is celebrating more than 50 years as a recording artist. He has enjoyed one of the most successful careers in the history of country music and is credited with helping to break color barriers by becoming the first black superstar within the genre. A true living legend, he has sold tens of millions of records worldwide with his large repertoire of hits. A three-time GRAMMY® award winner, Pride has garnered no less than 36 chart-topping country hits, including “Kiss An Angel Good Morning,” a massive #1 crossover hit that sold over a million singles and helped Pride land the Country Music Association’s “Entertainer of the Year” award in 1971 and the “Top Male Vocalist” awards of 1971 and 1972. A proud member of the Grand Ole Opry, Pride continues to perform concerts worldwide and has toured the United States, Canada, Ireland, The United Kingdom, Australia and New Zealand over the last several years. For more information, visit CharleyPride.com.

About Meat Loaf: Whether he’s on tape, on screen or the performance stage, Meat Loaf’s powerful presence is always felt in grand style. The Grammy® Award-winning musical titan exploded onto the scene with the breakout album, “Bat Out of Hell” in 1977. It has remained one of the top-selling albums in the world. Celebrated as one of the most extraordinary performers of all-time, Meat Loaf has appeared on Broadway and appeared in numerous films and television shows ranging from The Rocky Horror Picture Show, Crazy in Alabama, Tenacious D in the Pick of Destiny, and Fight Club to House, M.D., Masters of Horror, Hallmark’s Citizen Jane, Monk, Celebrity Apprentice, and Glee. The iconic performer continues to take center stage before packed concerts crowds, get rave reviews and generate international headlines. For more information, visit meatloaf.net.

About Charlie Daniels: With a career spanning nearly 60 years and exceeding 20 million in sales worldwide Charlie Daniels is the quintessential Southerner with a healthy dose of Wild West Cowboy. For decades, he has connected with his millions of fans in the varying genres of music that reflect his steadfast refusal to label his music as anything other than the "Charlie Daniels Band" sound — music that is now sung around the fire at 4-H Club and scout camps, helped elect an American President, and been popularized on a variety of radio formats. Having celebrated multiple GRAMMY® Awards, CMA Awards, ACM Awards, BMI Awards, GMA Dove Awards, CCMA Awards, his list of accolades is broad; the latest being the newest inductee to the Country Music Hall of Fame. Several of his albums have been RIAA Certified Multi-Platinum® and he has achieved a platinum-selling single in his iconic fiddle-ridden hit, "Devil Went Down To Georgia." An outspoken American patriot and strong supporter of the U.S. military, Daniels' talked-about Volunteer Jam concerts are world-famous musical extravaganzas featuring artists like Lynyrd Skynyrd, Ted Nugent, Trace Adkins, Alabama and others, all on one stage for one purpose – to raise funds for our U.S. military. Daniels 80th Birthday Volunteer Jam in 2016 raised funds for The Journey Home Project, a non-profit veterans assistance organization which he co-founded. For more information on Charlie Daniels, please visit CharlieDaniels.com.

About Crystal Gayle: Crystal Gayle is an award-winning country music icon whose reign in the music business includes 20 No. 1 country hits, six albums certified Gold by the RIAA and the first female artist in country music history to reach platinum sales with her 1977 album, We Must Believe in Magic. Her 1977 country-pop crossover hit song, "Don't It Make My Brown Eyes Blue," became an iconic staple and solidified her as one of the top female vocalists during the 1970s and 1980s. Her list of platinum and gold was to be matched only by her awards and accolades. CMA's "Female Vocalist of the Year," for two consecutive years, she became a Grammy® Award Winner for "Best Female Vocal Performance," thanks to her beloved "Brown Eyes" - a song that she today admits she has never grown tired of singing. Crystal swept the Academy of Country Music Awards for three of their "Top Female Vocalist" statuettes. She is the recipient of three "American Music Awards," voted by the nation as America's "Favorite Female Artist." Perhaps nothing sums up Crystal's career achievements as well as being awarded with a star on the fabled Hollywood Walk of Fame in October 2009. Also famous for her nearly floor-length hair, she was voted one of the 50 most beautiful people in the world by People Magazine in 1983. Gayle also has a star on the Hollywood Walk of Fame near Lynn's star. In August 2016, the Academy of Country Music honored Crystal with the Cliffie Stone Pioneer Award during the 10th Annual ACM Honors.™ Gayle was inducted into the Grand Ole Opry® in January 2017 by her sister and Opry legend Loretta Lynn. For more information, visit crystalgayle.com.

About Kenny Rogers: Rogers has an iconic career across diverse genres of music, having charted a record within each of the last seven decades. The first country artist to consistently sell out arenas, Rogers quickly became a pop superstar as well — his 28 Billboard Adult Contemporary Top 10's rank him fourth-best of all time among men, trailing only Elton John, Neil Diamond, and Elvis Presley. Rogers has recorded 24 No. 1 hits, 11 No. 1 albums, 25 Top 10 country albums and is the RIAA’s eighth best-selling male solo artist of all time. He has received three GRAMMY® Awards, 11 People's Choice Awards, 19 American Music Awards, eight Academy of Country Music (ACM) Awards and six Country Music Association (CMA) Awards. The past several years have been some of the most active, creative, and rewarding of Rogers’ entire storied career. For more information, visit kennyrogers.com.

About Dolly Parton: Dolly Parton is the most honored female country performer of all time. Achieving 25 RIAA certified gold, platinum and multi-platinum awards, she has had 25 songs reach #1 on the Billboard Country charts, a record for a female artist. She has 41 career top 10 country albums, a record for any artist, and she has 110 career-charted singles over the past 40 years. All-inclusive sales of singles, albums, hits collections, paid digital downloads and compilation usage during her Hall of Fame career have reportedly topped a staggering 100 million records. She has garnered seven Grammy Awards, 10 Country Music Association Awards, five Academy of Country Music Awards, three American Music Awards and is one of only five female artists to win the Country Music Association’s Entertainer of the Year Award. In 1999 Parton was inducted as a member of the Country Music Hall of Fame. She has her own star on the Hollywood Walk of Fame and became a member of the National Academy of Popular Music Songwriters Hall of Fame in 2001. Broadcast Music honored Parton with their Icon Award in 2003, and in 2004 the U.S. Library of Congress presented her with their Living Legend Award for her contribution to the cultural heritage of the United States. This was followed in 2005 with the National Medal of Arts, the highest honor given by the U.S. government for excellence in the arts. For more information, visit dollyparton.com.