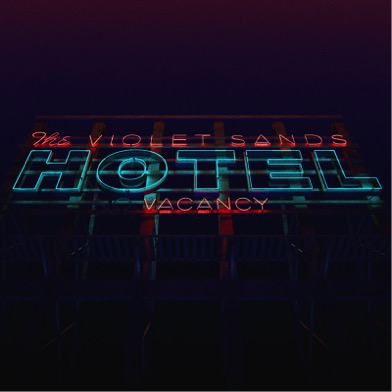 Today sees the release of Hotel, the debut LP from Brooklyn’s Violet Sands and inaugural full-length release from YouTooCanWoo.

The album draws inspiration from the distinctive feeling of being at a hotel - that transient space where people in different stages of their own "hero's journey” exist and interact for one fleeting moment in time.

The 10-track collection of exquisite modern pop includes previously released singles “Drive”, “Unusual”, “Hello, I’m Free”, “Do You Remember” and album track “Start Low, Get High” - which premiered this week via Billboard as part of their coverage of the newly launched Brooklyn-based record label, YouTooCanWoo.

After quietly uploading “No Matter What” and “Lift Me Up” to Soundcloud at the start of 2016, Violet Sands organically burst into the blogosphere, with the likes of PressPlay and HillyDilly triumphing their genre blend of classic influences such as Cocteau Twins, Peter Gabriel and The Cure with glitch pop, 90s R&B, shoegaze and trap, calling it an “incomparable” sound.

Those titles became part of the Strange Attractor EP, which includes “Coming Back” (Noisey premiere), “Modern Ruins” (NYLON music video premiere) and “Airy Canary” (which garnered lots of love in Noon Pacific’s curated playlist community). The song “No Matter What” was featured in a commercial for Spotify’s Party App along with “Lift Me Up,” it was included on a Vinyl Moon limited edition compilation, and its surreal music video was selected as a Vimeo Staff Pick and a 2017 Webby Awards Official Honoree (Music Video Category).