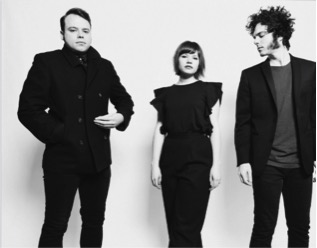 The record was inspired by the feeling of being at a hotel, a transient space where people in different stages of their own "hero's journey” exist and interact together for one fleeting moment in time. Featuring the singles “Hello, I’m Free,” “Do You Remember,” “Hands,” and “Unusual” which PressPlayOk called “...one of their most gorgeous yet.”

In the latest track “Start Low, Get High,” Violet Sands experiments with a blended palette of vintage minimalism and “Downtown New York” classical music (Glass/Reich/Nancarrow) using the vernacular sounds and current production treatments they’ve been inspired by of late:

“‘Start Low, Get High’ is a vignette of the metropolitan grind found in all cities: relentless routines and unending complexities that are inspiring and exhausting at the same time,”explains Violet Sands guitarist Derek Muro. “The combination of musical influences [on the song]  speaks to that timelessness of living in a city, where everywhere around you the past is inside the present.”

Hotel will be the first full-length release on YouTooCanWoo, a brand new label arm of the band members’ long time studio and community in Brooklyn. The trio is part of a crew that works on diverse sound and audio projects, including composing original film and video game scores and producing and mixing artists like MGMT and The Knocks.

After quietly uploading “No Matter What” and “Lift Me Up” to Soundcloud at the start of 2016, Violet Sands organically burst into the blogosphere, with the likes of PressPlay and HillyDilly triumphing their genre blend of classic influences such as Cocteau Twins, Peter Gabriel and The Cure with glitch pop, 90s R&B, shoegaze and trap, calling it an “incomparable” sound.

Those titles became part of the Strange Attractor EP, which includes “Coming Back” (Noisey premiere), “Modern Ruins” (NYLON music video premiere) and “Airy Canary” (which garnered lots of love in Noon Pacific’s curated playlist community). The song “No Matter What” was featured in a commercial for Spotify’s Party App along with “Lift Me Up,” it was included on a Vinyl Moon limited edition compilation, and its surreal music video was selected as a Vimeo Staff Pick and a 2017 Webby Awards Official Honoree (Music Video Category).

In 2017, Violet Sands returned in a massive way with the release of “Hello, I’m Free” which was the soundtrack to Spotify’s announcement of its Discover Weekly feature. They have subsequently released three singles (“Drive”, “Do You Remember”, “Hands,” and “Unusual”) off of their upcoming debut album Hotel, which is also the first full-length release on YouTooCanWoo - the brand new label arm of the group’s long time studio and community in Brooklyn.