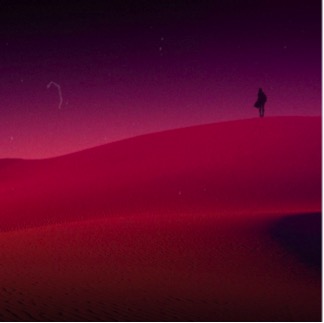 Violet Sands share their new single “Unusual” - out today on all DSPs - via Brightest Young Things in anticipation of the band’s debut LP Hotel, out June 30th on newly-minted Brooklyn label YouTooCanWoo.

Conjuring dreamy vibes that straddle influences of Disclosure  and Cocteau Twins, “Unusual” is the indie/electronic trio’s final single to be revealed prior to album release. It’s available as an immediate download with album pre-order along with prior singles including “Drive,” a “...wistful and genre-bending masterpiece that once again showcases Deidre's alluring vocals over dreamy, guitar-driven soundscapes and inventive production.” (Wonky Sensitive)

Frontwoman Deidre Muro describes the new single as “riding the enchanted waves of discovering something or someone new. There's a lot of magic in that first spark of curiosity - it's like waking up from a lifelong dream to a completely new heightened reality. This song is that moment in extreme slow motion, reveling in all the emotions, uncertainties, and intrigue." It’s an intoxicating combination, and like the rest of Violet Sands music, it works.

Hotel will be the first full-length release on YouTooCanWoo, a brand new label arm of the members’ long time studio and community in Brooklyn. The trio is part of a crew that works on diverse sound and audio projects, including composing original film and video game scores and producing and mixing artists like MGMT and The Knocks.

Harnessing the alluring vocals of Deidre Muro (Deidre & the Dark, formerly of Savoir Adore), the inventive production of David Perlick-Molinari (French Horn Rebellion) and the atmospheric guitar-scapes of Derek Muro (Love Like Deloreans, Mighty Five), Violet Sands craft genre-bending music, creating a fresh and dreamy mix of nostalgia with the present. Violet Sands stunning video for “No Matter What” continues to gain accolades and was recently announced as a 2017 Webby Awards Official Honoree (Music Video Category).