There are cool shows that hit my radar that just scream for me to attend and check them out, photographically and sonically.  One such show is the recent stop for Anthony Hamilton and special guest Ledisi.  After a short set from opener Tweet, the stage was changed over and readied for Ledisi to entertain the crowd with a killer set of hits from her catalog.  Full disclosure - I am a big fan of Ledisi and couldn't wait to see her on this tour date.  From the minute she hit the stage, she entertained with her songs, her anecdotes, and her banter with the packed house, who seemed to be as excited to see her as I was.  The show kicked off with one of my favorite songs of hers, "I Blame You."  The song got me into the groove and ready to not only photograph this awesome performer, but to enjoy an hour or so of her music.  As she moved from song to song, she talked about current events, including upcoming elections and mass shootings to drive home the point of how important love is in every facet of our lives.  There were also lighter moments when she discussed relationship dysfunctionality and poked fun at members of the audience that she knew were either "sitting next to" their dysfunction or attending the show with someone else's dysfunction, which garnered tons of laughs and cheers from the crowd.  Her set rolled from there, pulling songs from various discs over the last few years.  With her songs and performance, I am positive she converted a lot of those that came to the show not quite knowing who she was or what she was about - although based on the reaction to her songs and show, I am not sure that number was very high.

Next up was the headliner and other than some great R&B, I wasn't sure what to expect.  After a short set change, the anticipation and excitement in the packed venue grew minute by minute, until the moment arrived when Anthony Hamilton's band kicked the show off and soon he appeared center stage and ignited a fire within the female component of the audience.  While the songs sounded great and his voice carried from the sound system and across the crowd nicely, his control of the stage and the ebb and flow of the show was the real star of the show.  When he went from song to song, he made women swoon and allowed each guy in the place to catalog the songs that would come in handy later when trying to set a mood.  With seven studio discs to pull from , there was no shortage of music.  The songs flowed from the stage and the audience danced, sang, snuggled, and more to each song as the moment dictated.  The audience matched him in energy from song to song and the women seemed to get louder with each moment as the night wound to the end.  I didn't know much about Anthony Hamilton going into the show, but you can bet once I got home, I was online ordering up a couple of his most recent discs to add to my collection. 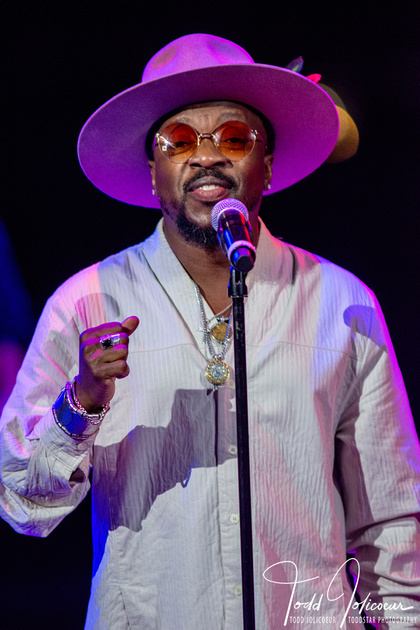 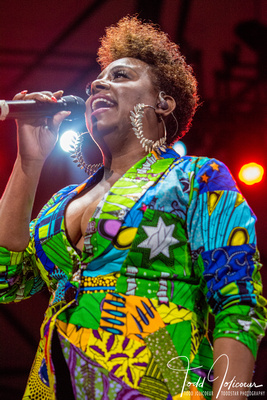