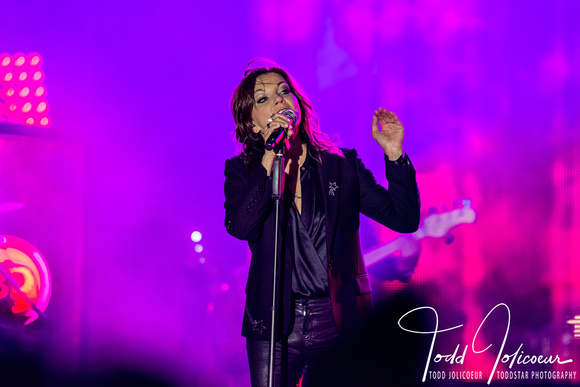 The ProMedica Summer Series in Toledo OH featured country legend Martina McBride on a comfortable August Friday night - and the packed park couldn't wait for the show.  After a couple good opening sets, the stage was changed over and setup for Martina and her band to take over and fill the night with music and good vibes - and she delivered.  Kicking the evening off with the one-two punch of "Love's the Only House" and "My Baby Loves Me," the evening was off and running on a killer note.  The band was tight, McBride was all smiles and high energy feeding off the crowds excitement as much as her own.  Slowing things down a bit, she pulled "Valentine" out of her catalog and kept the show rolling with another certified hit.  Next up was "Diamond" - the lone track of the evening from her latest release, Reckless.  Another great song from Martina's catalog popped into the set when she and her band ripped into "I Love You."  A pair of covers - Lynn Anderson's "Rose Garden" and Loretta Lynn's "You Ain't Woman Enough (To Take My Man)" were thrown into the mix before two more songs from her own repertoire - "In My Daughter's Eyes" and "Anyway."  This was then followed by another couple covers when she shifted gears and played Roger Miller's "King of the Road," paired with Van Morrison's "Wild Night."  My favorite moment of the evening came next when Martina and her band played the emotionally charged "Concrete Angel," one of my favorites from her career that I had never before heard live in several appearances I have attended [RIP Saige].  As McBride worked toward the end of the set and evening, she played fan favorites "Wild Angels" and "This One's for the Girls" which got women throughout the venue singing, dancing, and enjoying the music and each other's company.  With a string of songs that have meaningful lyrical content, the icon led her band through the best pairing of the evening when she closed out the set with "A Broken Wing" and "Independence Day."  Coming back out to extend the fun and excitement for everyone in the venue, she played three more great songs, with "Blessed," an older track from 1995, "Two More Bottles of Wine," and a song I have enjoyed hearing her cover tour after tour when she closed the evening out with Pat Benatar's "Hit Me With Your Best Shot."  She might as well ask for it, because she certainly delivered it this evening - she gave Toledo her best and the crowd took it note after note.  With only a date or two left on her current tour, you can still grab tickets for her holiday tour... don't miss out!

Setlist: Love's the Only House - My Baby Loves Me - Valentine - Diamond - I Love You - Rose Garden - You Ain't Woman Enough (To Take My Man) - In My Daughter's Eyes - Anyway - King of the Road - Wild Night - Concrete Angel - Wild Angels - When God-Fearin' Women Get the Blues - This One's for the Girls - A Broken Wing - Independence Day - Blessed - Two More Bottles of Wine - Hit Me With Your Best Shot 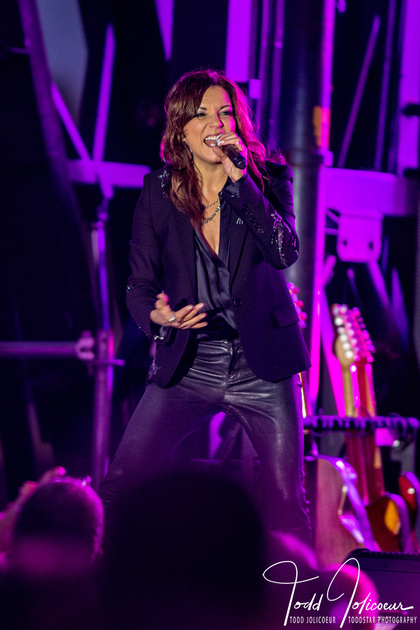