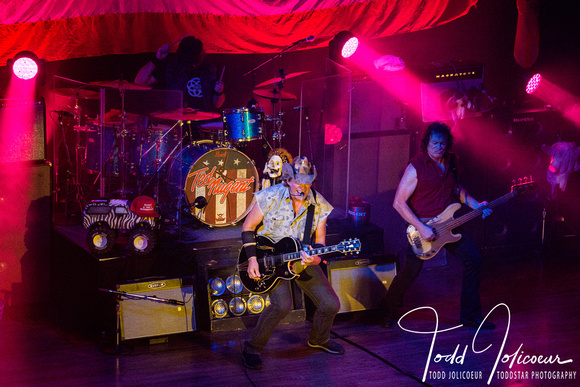 As his tour winds down, Ted Nugent decided to grace the quiet Lexington community with another show full of rock classics, riffs, and overall Motor City Mayhem.  Armed with guitars and his rhythm section of Greg Smith on bass and Jason Hartless on drums, he dropped into town on a Tuesday evening in late August and the town reacted - giving him ANOTHER sold out show at the venue (his fourth in four years).  Switching it up and saving the "Star Spangled Banner" for later in the show, Nugent and his band ripped into the music right away, setting the stage for the remainder of the evening.  With a ton of songs in his catalog, it was a small surprise as he played through his set, song after song.  The fun of a Nugent show is watching and listening as he plays riffs and solos in each song that take you back to the days when you first heard some of the songs and others when you picked up your own air guitar and played those same solos and licks with him as the music blasted through your stereo.  The audience was treated to the staples and fan favorites that seem to fill out the set list tour after tour with a couple deeper tracks being thrown in for good measure.  Another fun facet of Ted's show is seeing how he controls the flow of the show musically, but also engaging the crowd with his banter between songs.  He may be a Michigan boy, but somehow a part of his soul and roots were cultivated in Lexington, as he seems to settle in and make the stage his own.  As he seems to skip the material form my personal favorite disc, two of my favorite classic Motor City Madman track hit the set early when "Stranglehold" and "Motor City Madhouse" fronted the evening, so I was able to settle in and dig the show after storing the camera gear.  If you can't check out the last couple dates on his current swing, keep an eye on his site folks... Ted is far from done and I can't wait to see him tear up Lexington again next year! 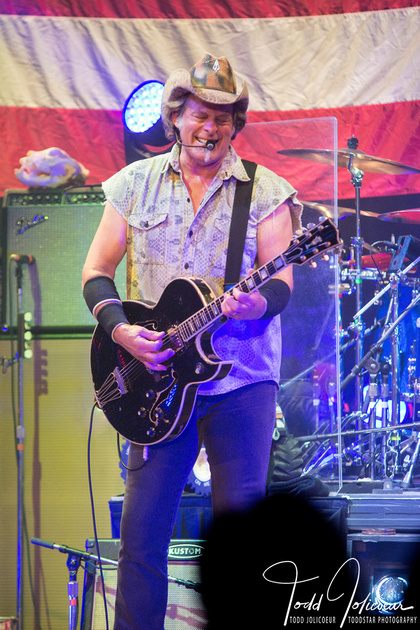