According to a recent press release: "The Michigan Burlesque Festival started in 2012 with the intent to bring some of the world’s most unique performers to Detroit in hopes of reuniting the traditional concepts of original burlesque theater, where dancers and vaudevillians shared a stage to provide well rounded and entertaining sexy comedic show. It has grown into a two-day festival featuring not-to-miss local talent and award-winning performance artists and world renown burlesque performers, such as past headliners: Lushes LaMoan, Bella Sin, The Weird Sisters, Red Hot Annie, Super Happy Funtime Burlesque, Russell Brunner, Roxi D’Lite, Dangrrr Doll, Ray Gunn, Mr. Gorgeous, Jeez Loueez, Satori Circus, Hank E Panky, Dirty Martini along with so many more phenomenal performers." We get the MC and performer Foxy Tann to discuss routines, influences, and much more...

1. What got you into burlesque, and can you tell us about the moment you realized you wanted to be a performer? Building on that, is there a specific performer or act that guided your performances in the beginning?

I feel like burlesque found me actually. I have been performing professionally in one capacity or another since I was 16. When I moved to Minneapolis, I spent years working in regional theatre, touring childrens theatre, and circus. I started a show at The Gay 90's in DT Mpls in 1997 that was burlesque in it’s entirety, but I didn’t know it. I was just having a hell of time working in a 50's lounge, armchair traveler genre. I thought it was hilarious - and it was! We did that show for a couple of years and I floated around and finally saw a show billed as burlesque and I saw Catherine D’Lish perform her spider web act and the bird cage act and i was like well now we are talkin’ here! This is something that I am already doing, just with a bit more naked. And what’s wrong with a little bit more naked?

2. Who would be your main influences or performers you admire?

I would say more so performers of yesteryear and drag queens to be honest. Rusty Warren, Joan Rivers, the female blue comics of the 50’s and 60’s - Lip Synchca, Miss P from the Parliment House in Orlando, Deena Cass from The Garden in Des Moines. I also adore Don Rickles and Rodney Dangerfield! They are geniuses and absolutely masters of their craft!

3. When it comes to the musical component of your performance, is there a certain musical genre, artist, or specific song you have always wanted to use?  What was the first song you ever used – and what does that song mean to you now?

The first song I ever used to solo was "Tell Mama" by Etta James. I emerged out of a giant clam! Etta is tried and true. I have done multiple acts to Etta! I tend toward 70's funk and blues. I like the structure of blues songs because it makes it a little easier to choreograph. But there are a lot of songs that I love but just wouldn’t work for me on stage as an act. Sometimes things just aren't meant to be.

4. What is one thing you wish audience members knew about you, your performances, or burlesque in general?  What do you feel is the biggest misconception about you and your burlesque career? 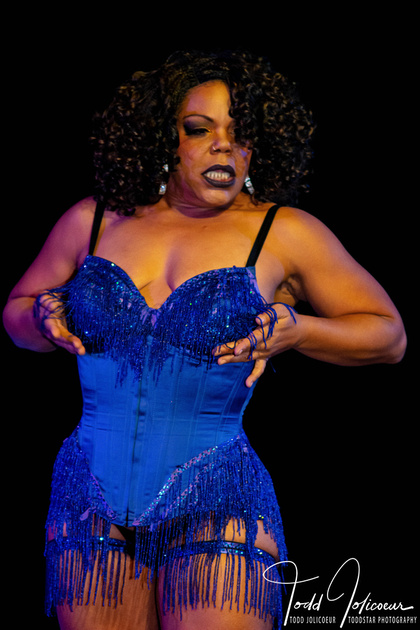 I want the general public to know that there really isn’t anything dirty about what is going on at as burlesque show. Seriously! you will see more raunchy stuff in your average music video. What is happening is a celebration of every body and every sexuality. It’s a bunch of people who have decided that they have something to say and burlesque has provided a way for them to say it. on their own terms. with their own vision. And that is the difference between burlesque and commercial stripping... commercial stripping is about portraying someone else's fantasy, burlesque is about portraying the performer’s fantasy!

5. When was the last time you were star struck by a burlesque performer and who was it?

A couple of years ago, at The Burlesque Hall of Fame in Vegas, I had the privilege to meet Rusty Warren in person. I cried at her, and was utterly unable to make any sense but i was able to get across that I loved her work and that i had been stealing her material for years and thank you!

6. What is the best part of being a burlesque performer?  Conversely, what is the worst part? If you could no longer be a performer for whatever reason, what would be your other artistic outlet?

I think the best part of being a burlesque performer is that  i get to choose the manner of my artistic expression. In plainer words I get to do whatever I want artistically! Not many performance genres offer that. I make my own hours, I decide where and when I am going to work. I decide how I am going to work. I have an autonomy that most  people don’t get, and it’s wonderful. On the flip side is the fact that I am constantly on the hustle, trying to find or generate more work, there is no stability, no insurance, no 401k. And the other side of being in complete control of my art is that I am in complete control of my art. I have to build, make, choreograph, market, and fund and work that I want to present. And sometimes it is really difficult to manage all of those things at once. Don’t get me wrong, I am not complaining at all, I love my life. I have been allowed to be a citizen of the world because of burlesque... I owe my current lifestyle to the strippers of yesteryear and I thank them!

7. What is one thing you still want to achieve in the burlesque world?  At the end of the day, what contribution to the local burlesque scene do you hope you will be remembered for?

I hope that I will be remembered for being a person who opened doors and held them open for new people wanting to get into performing. So many people pull the ladder up after they have climbed it... I don’t want to be like that, I want to turn around and lend a hand up to whomever wants to make that climb. No one did it for me and I could have used a helping hand multiple times in my career. I hope to provide that to a bunch of people before I am done. And I also pray that people remember me for being a kick ass hilarious emcee of massive, unseen before talent!