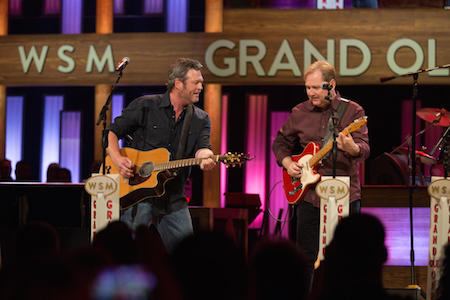 NASHVILLE, Tenn. (June 10, 2017) – When asked who his dream Opry duet partner was in an interview, Blake Shelton answered “Steve Wariner.” It’s not surprising as Wariner has had one of the longest-lasting and most influential careers in country music history. On Thursday night, during a special star-packed CMA Week Opry performance, the pair sang a duet on “Lynda” -- one of the singer/songwriter's 22 No. 1 hits. 2017 also marks the 30th Anniversary of the song released in 1987.

“I am humbled by Blake’s answer to that question and singing with him on the Grand Ole Opry stage was a heck of a time. He’s one of the giants of today so I am glad we got to do this,” said Steve Wariner.

About Steve Wariner: Twenty albums into his five-decade career, Steve Wariner still has plenty of musical tricks up his sleeve. In the late ‘70s Chet Atkins signed Wariner to RCA and produced his first recordings. More than 30 Top 10 hits followed, including 10 No. 1s such as “All Roads Lead To You,” “Some Fools Never Learn,” “Lynda,” and “Where Did I Go Wrong.” The moving “Holes In The Floor Of Heaven” garnered Wariner the ACM award for Song Of The Year in 1999, as well as CMA awards for Song and Single Of The Year. Additionally, artists ranging from Garth Brooks, Keith Urban and Clint Black have all scored hits with Wariner-penned songs. He is one of only five guitarists bestowed with the “Certified Guitar Player” honor by Chet Atkins and is a member of the Kentucky Music Hall of Fame, the Music City Walk of Fame and the Grand Ole Opry. Over forty years after signing his first record deal with RCA, Wariner’s passion for writing, playing and singing music remains undiminished.